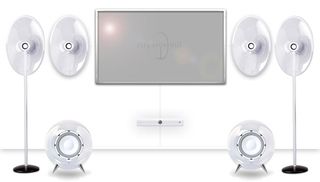 The designs for a "unique" new clear speaker system from Ferguson Hill have been revealed – and now the London-based audio specialist is asking for your help to take the plans onto the next stage.

A full range of digital inputs and wireless connectivity are planned as part of the Ferguson Hill Clear Speaker System, which the company says will be a "great sounding and fully functional" system.

Ferguson Hill has turned to crowd funding website Kickstarter in an attempt to make the new system a reality, with the project only set to go ahead if £149,500 is pledged by 6pm GMT on March 10th.

If using conventional box speakers on either side of your TV to enhance the sound doesn't appeal to you, the Ferguson Hill Clear Speaker System could be the answer with its sleek design in the traditional Ferguson Hil style.

The company says its new system will provide a great sound solution for your TV and give you a full home cinema experience, as well as acting as your main hi-fi – compatible with all genres of music.

Three separate systems will be available – the Primary, the Deluxe and the Deluxe surround sound – and it is thought they will all start shipping in September if the Kickstarter campaign is successful.

All three systems come with a fully specified integrated amplifier, with the Primary system containing two horn speakers, two wall mounts, two stands and a bass speaker. It is expected to cost £895.

The Deluxe system (£1125) will have two bass speakers (rather than one), and the Deluxe surround sound system will come with two additional horn speakers, stands and wall mounts for £1395.

The 180W amplifier and AV processor will include six internal power amplifiers, a high quality DAC and 5.1 / 7.1 internal AV processing, as well as eight inputs – such as HDMI and USB.