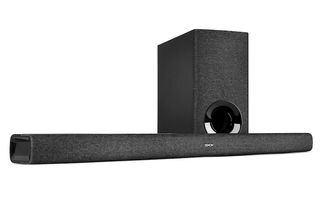 Denon is continuing its 110th-anniversary celebrations with the launch of a well-equipped budget soundbar.

Chromecast integration allows for multi-room grouping with other Chromecast-enabled kit, too, and also opens the doors to voice control so long as you have a separate Google Assistant device. Bluetooth is also onboard for when your wi-fi inevitably cuts out.

As far as taking the audio reigns from your TV goes, the DHT-S416 sports both optical and HDMI ARC connectivity. Three EQ presets (Movie, Music and Night), which offer some way of customisation depending what you're listening to, are bolstered by three dedicated dialogue-enhancing modes, so you can decide how clearly you want to hear the bad news on the telly.

In an effort to complement the DHT-S416's impressive feature set with an equally promising performance, Denon has packed its modest proportions (it's only 5.6cm tall) with a pair of 1.25 x 4.4in full-range drivers and two 1in tweeters. The 5.25in woofer inside the wireless sub promises to add a healthy dollop of bass to proceedings, too.

It certainly all sounds good on paper. The Denon DHT-S416 will be available from the end of this month, so hopefully we'll get our ears on it soon.