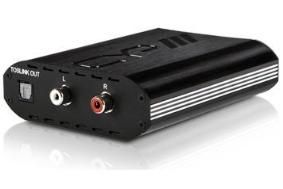 Among the new models are devices offering SRS TruVolume processing, a USB DAC also providing an optical digital output, and a range of HDMI and infrared remote control switchers.

Two models are available with SRS TruVolume processing, which will regulate TV volume to avoid nasty surprises when channel-hopping or at commercial breaks.

The £99 AU-D8S has HDMI connections, while the AU-D11S is a Scart version, and has both Scart passthrough and analogue stereo outputs.

The £99 AU-D150 has both Mini USB and optical digital inputs, and analogue stereo and optical outs. It will support signals of up to 16-bit 44.1/48kHz over USB, and 24-bit 192kHz via its optical in, and is able to function both as a DAC and a USB/optical converter. It's powered either via the USB input or using a supplied DC converter.

The EL-42SA, which is £202.55, provides four HDMI inputs and two outputs, and can also take stereo analogue inputs for each of the four inputs, while the £335 PU-Q1H8CS can take one HDMI input and output to up to eight displays over CAT6 cabling.

Each display is then connected using a PU-107RX CAT6/HDMI converter.

Finally, two products have been added to handle complex remote control set-ups, especially when components are hidden away.

The £156 OR-IR44 is a 4x4 infrared matrix switcher, enabling control of up to four devices from any one of four locations, while the £82.25 PU-IR01 allows infrared remote controls to work over distances of up to 250m, using a sender and receiver linked with CAT6 cabling.