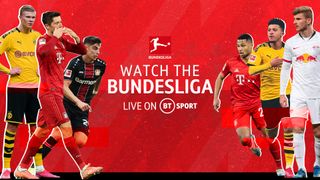 BT Sport, the exclusive UK broadcaster of Germany’s Bundesliga football, has confirmed it will show every match live for the remainder of the 2019/2020 season, which resumes this weekend.

At least one match every weekend will be available in 4K on BT Sport Ultimate.

The full fixtures for this weekend are as follows:

The coverage will be presented from the BT Sport Studio with contributions from home by guests and commentators. This Saturday's coverage will be hosted by James Richardson and Raphael Honigstein, joined from home by former Bayern Munich and England midfielder Owen Hargreaves. On Sunday, Lynsey Hipgrave and Honigstein will be in the studio, with Hargreaves piping up virtually from home.

Additional Bundesliga-related programming, such as a Bundesliga special of BT Sport show The Football’s Not On and a Jadon Sancho documentary, will also complement the live coverage, so BT Sport-subscribing football fans should have a good flick through the EPG now.

Not in the UK? BT Sport packages grant access to live streams via the BT website and BT Sport app, so you can watch from abroad using a VPN (some of our favourite of which are just below).

Bundesliga live stream: how to watch German football in 2020