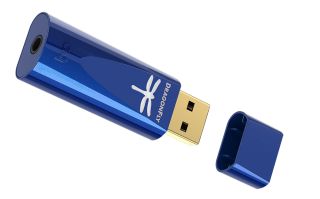 AudioQuest’s DragonFly line of budget portable DAC/headphone amps has made quite the buzz over the years, delivering a performance boost for your laptop or smartphone's digital library in a compact, USB-stick form and at an affordable price. The DragonFly Black (£69) and DragonFly Red (£149) have collectively won multiple What Hi-Fi? Awards since 2016, and now an all-new DragonFly has arrived to try build on that success at a slightly higher price.

The DragonFly Cobalt (£269.95 / $299.95) – its name is typically reflected in its colour finish – is the new flagship 'Fly, promising enhanced performance thanks to a number of advanced components.

For starters there's an all-new ESS ES9038Q2M DAC chip, which has a minimum-phase slow roll-off filter that AudioQuest says delivers a more expressive sound. A new Microchip PIC32MX274 microprocessor supposedly draws less current and increases processing speed by 33 per cent, and an improved power supply filtering has been implemented to reduce the noise inherent in wi-fi, Bluetooth and cellular signals.

The Cobalt is 10 per cent smaller than its siblings, too – just 5.8cm long – and comes with a USB-A-to-USB-C adaptor to cater for the increasing number of Android smartphones with the USB-C connection.

It features the same 2.1-volt output, headphone amp and volume control as the Red, and too supports Tidal Masters (MQA) playback on Android and Apple smartphones thanks to its built-in MQA renderer. Its file limit is still 24-bit/96kHz, too.

The Cobalt, like its siblings, also utilises Gordon Rankin's StreamLength asynchronous USB code, and uses a single clock for both the DAC and microcontroller functions, promising a better performance than DACs that use multiple clocks.

Unlike the big-eyed bugs themselves, which have an average lifespan of only a few years, the AudioQuest DragonFlys have been around since 2012, improving digital sound in a conveniently (and once-uniquely) compact way. We can only hope the Cobalt will prove just as competitive as its £269 price point.

The DragonFly Cobalt is on sale now, with the first 10,000 sold boxed with trial Tidal and Qobuz subscriptions.