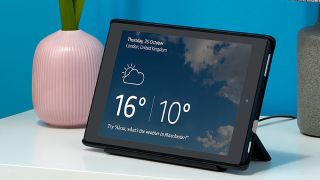 If you fancy an Echo Show, but its £200 price tag is a bit steep, there is a more affordable alternative - the new, revised Amazon Fire HD 8 tablet at £80.

It now provides video content to go with your Alexa voice commands such as video flash briefings, the weather, security camera feeds or movie trailers. There's also an optional Show Mode charging dock which comes as part of a £110 bundle with the tablet. This allows you to view and charge the tablet at the same time.

Other tech highlights include a 1.3Ghz quad-core processor, 16Gb or 32Gb of internal storage that can be expanded to 400Gb with a microSD card, HD 720p front-facing camera and up to 10 hours' battery life.

Show Mode will be added to the Fire HD 8 via an over-the-air software update after initial set-up, and will come to the current Fire HD 10 models and previous generation Fire HD 8 later this year.

The new tablet is available in four colours: black, marine blue, punch red and canary yellow and can be pre-ordered from today for delivery on 4th October.