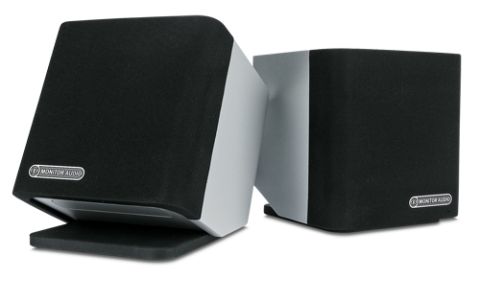 The hunt for excellent desktop speakers just got a little easier

Monitor Audio has already had a stab at desktop audio in the shape of its i-deck range of iPod-friendly systems. But this is their first foray into the world of wireless desktop speakers.

The form factor of the Monitor Audio Airstream WS100s is simple yet extremely effective. The die-cast aluminium cubes are a good size and feel reassuringly weighty and sturdy. The speakers boast a magnetic base, which is hinged so you can angle them upwards on a desk or straight out from a shelf.

In practice, this works well with the listener enjoying a cohesive, enjoyable stereo image whatever their angle. If we had one criticism it would only be that the speakers ‘flop’ from upright to angled. We think having some kind of damping would polish their presentation.

Beneath the grilles lie 7.5cm mid/bass drivers driven by 20W amplifiers and 19mm tweeters with their own 10W amp.

Instead of opting for Bluetooth or AirPlay, Monitor Audio has gone for the SKAA wireless transmission system. We were treated to a reliable and robust connection through this system – there was no signal breakup, even with the speakers and dongle in separate test rooms.

You’re provided with a small USB transmitter in the box, which plugs into your Mac or PC – simply change the audio settings on your computer to output over USB and away you go.

The system can handle a multitude of file formats, with the transmitter downsampling high-res files for playback. You can use up to four pairs of speakers with any one dongle – each dongle costs £40.

The right speaker acts as the master and as such includes the wireless receiver, a 3.5mm auxiliary input, and LEDs that indicate whether you’re using a wireless or wired connection. A multipin umbilical cable connects the right speaker to the left.

Although the supplied remote control is shaped to fit in the palm of your hand the small buttons and slippery surface don’t make for the most pleasant of experiences, but volume, power, play/pause and input selection are all catered for.

Considering their size, the WS100s are capable of greater scale and dynamics then many rivals at this price. Stream Childish Gambino’s L.E.S and the sealed boxes fire out a weighty, solid bass kick. Edges of notes are well-defined, while strings flow with an air of both subtlety and authority.

Switch to the 3.5mm auxiliary input and the tune sounds even smoother and more natural. Harsher recordings may encourage a little brightness in the treble, but it’s still of sufficiently high quality not to be a major problem.

It’s hard to believe these speakers cost just £250, and that’s even before you start using the wireless functionality. Perched on a desktop or shelf, they can fire out seriously good sound.