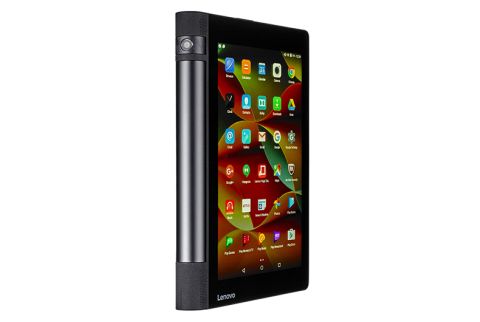 With a unique design that’s a clever as it is flexible, the Yoga Tab 3 is about as premium as budget tablets go

Lenovo’s Yoga Tab 3 feels a lot more expensive than it is – not something you often hear said about budget tablets.

A mixture of cool, brushed metal with a soft matte finish, it also blows the competition out of the water in the design stakes too, with a clever form factor that makes it stand out in a sea of rectangles.

Instead of aiming for the standard super slim design, Lenovo has chosen to make one side of its tablet noticeably chunkier – almost like the spine of a magazine when you’ve folded it over – in order to incorporate some added functionality.

This includes a built-in metal kickstand, which allows the Yoga Tab 3 to live up to its shape-shifting name via a number of viewing positions, as well as house a pair of stereo speakers and a swivelling 8MP camera.

It also works well as a grip when reading in portrait mode.

This is not the attention to detail we’re used to seeing in a tablet at this level, and so just minutes in from getting it out of the box, we’re pretty impressed.

The power button sits at one end of the chunky cylindrical edge, while a headphone jack sits at the other.

There’s also a volume rocker, which changes its functionality based on your orientation – something lesser tablets choose to ignore – while hidden behind the kickstand is a removable panel for adding a microSD card to boost the 16GB of onboard storage.

The 8in screen is bright and much crisper in its handling of icons, text and logos throughout its interface than the Archos 80b Helium, which has the same resolution display at 1280 x 800.

Text is easily readable on webpages too, so browsing is no issue whatsoever.

Strangely though, the Lenovo falls a short of expectations when viewing video, with a picture that lacks fine detail and definition when compared with the Amazon Fire HD 8.

It’s a sharper, more engaging performance than that of the Asus Zenpad C 7.0, and certainly of the Archos 80b Helium, but the Amazon Fire HD 8 renders both local and streamed video with a touch more detail and clarity than the Yoga Tab 3 is able to.

Of course, the Lenovo Yoga Tab 3 does have full access to the Google Play store too, which does win it back some points against the Fire HD 8, giving you a touch more flexibility when it comes to downloading apps, not to mention a more straight-forward interface.

The performance of the Yoga Tab 3 is much more up to the standard we expect at this level, and we find we’re able to hop around between menus and apps with minimum delay.

Add in a few downloads or too many open pages and you might notice a few more stutters crop up, as well as the odd lag with gaming too, though it happens less often here than on rivals such as the Asus Zenpad C 7.0.

That said, we’re not sold on the idea of the Lenovo being used as a gaming tablet. While it’s capable of it, the extra bulk can make the Yoga a little taxing on the wrists if you need to hold it for long periods of time.

The Yoga Tab 3 packs a well-balanced sound that steers clear of any hardness in the treble and makes for a perfectly reasonable listen.

As with most tablets at this price, we’d like timing to be a little tighter and for there to be a little more precision, but dynamically it’s as expressive as we can expect and detail is perfectly acceptable too.

Lose the headphones and the quality of the stereo speakers is quite an unexpected surprise. There’s a decent amount of weight and detail on offer so you can happily listen to a movie through them, particularly helped by the fact they are forward facing – another tick for the Lenovo design department.

The Yoga Tab 3 claims to support Dolby Atmos, and while we’d take that with a large pinch of salt when it comes to your expectations, there is a pre-installed Dolby app onboard with a number of modes to play around with.

These include EQ settings for listening to movies, music or playing games, as well as the ability to set a couple of custom modes too.

As we mentioned earlier, the Yoga Tab 3 features a single swivelling 8MP camera, which, as long as you can avoid putting your fingerprints over the lens as you turn it, doesn’t take a bad photo at all.

There are a number of selectable modes but using auto, we got sharp, detailed pictures that the competition doesn’t come close to, with colours well balanced and outlines well defined.

The HDR mode does a decent job of balancing detail in the highlights and shadows too, while low light photographs are surprisingly usable with minimal noise. Planning to video call? The kickstand and swivelling camera mean you can get the positioning just right, which is very handy indeed.

As for stamina, the Lenovo has plenty of it and even in a day filled with music, movies and browsing, it rarely dropped to much below 50 per cent.

A 30-minute Netflix stream at full brightness took just 7 per cent of battery, half that of the Amazon HD 8.

With a clever design that sets it apart from the crowd, the Lenovo Yoga Tab 3 is an easy tablet to like at this price, but that doesn’t mean there aren’t still areas for improvement.

In particular, the screen’s performance is still too much of a compromise for the full five stars, particularly when we know better is capable at this resolution in the Amazon HD 8.

If you can put up with that and the occasional performance bugbears that are part and parcel of this territory, this is a budget tablet that’s really worth considering.