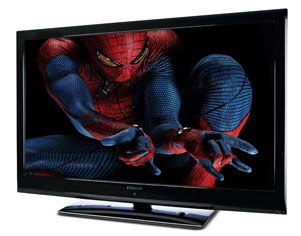 While it delivers a decent picture and 3D, there are much better TVs at this price

It might be relatively unknown in the popular market, but Finlux has been in the TV game since 1964, and recently decided to offer its products online in the UK.

When we first received the 42F701-M, it was going for a promo price of £390, which made it a rather attractive buy. However, as it’s now reverted to its original price of £500, it puts things in a different perspective.

Our sample came finished in glossy black, and was slightly unsteady on its stand.

This 42in LCD has basic menus that, while not as swish as other brands, are easy to navigate – so setting up the TV is a song. The remote is slightly too large, though.

Good picture, but light on features
The 42F701-M’s best asset is its reasonably sharp picture quality. With Full HD capability, Freeview channels and Blu-ray films such as Constantine are delivered with a clear picture and a relatively high level of detail, with sharp edges.

However, there is a touch of glare, which can’t quite be tuned out with brightness and contrast while keeping a decent overall balance. There is a slight red tinge to the colour but, again, there is too much disparity between small adjustments to fix this.

Even when optimised, the black levels could be a lot deeper to reveal more natural-looking shadows, and some texture and nuances are lost in the process.

Put the Avatar Blu-ray on and you’ll be rewarded with a relatively good 3D performance; depth is conveyed very nicely, along with good detail. There’s a bit of judder, but it’s pleasing to watch overall.

3D glasses easy on the eye
The passive 3D glasses are lightweight and don’t strain your eyes – always a bonus.

You can plug in your Blu-ray player and games console into any of the three HDMI inputs, and record multiple TV programmes to an external USB memory stick.

While there are no internet/smart TV options or a Freesat tuner, you can use the Media Browser to play any videos, music and photos you have stored on a USB drive.

While it delivers a decent picture, Finlux needs to up its game, as rival brands have a lot more to offer at this price.