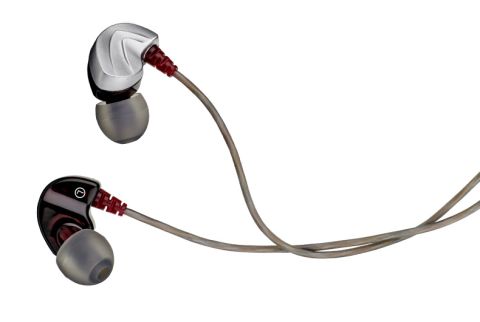 The Fidue A73 are larger than classic dual-driver earphones like the Jays q-Jays and long-discontinued Ultimate Ears 700 because they use a hybrid driver array rather than a pair of tiny balanced armatures.

There’s a balanced armature to handle the higher frequencies and a 10mm dynamic driver to fill in the lower registers.

At first glance the Fidue A73’s swooping earpiece design looks like it’s made of plastic, but it’s actually cast in aluminium. The outer part is metal, the half that points towards your face plastic.

It’s translucent red plastic, to give you a look at what’s going on inside.

One part sure to put a few of you off is that the Fidue A73 are meant to be worn over your ears. A pair of ear hooks is included in the box, or you can just trail the cable over your ears without them if you prefer.

Wearing them with the cable simply dangling down doesn’t work too well in our experience, though. They tend to wiggle their way out of your ears after a while, particularly if you move about a lot.

Of course, using ear hooks largely sorts out any issues with microphonic noise too.

The cable is non-removable, but Fidue only offers a replaceable cable in its top-end A83. That’s a triple driver model almost three times the price of the Fidue A73.

Fidue has kept things simple with the cable too. There’s a single-button remote with mic, designed to maximise phone compatibility, although these days you can get three-button remotes that work with iOS and Android devices alike.

You can really hear the workings of the two drivers in the Fidue A73s. The balanced armature delivers solid mid-range and treble detail, with greater definition than you tend to hear from a typical mid-range dynamic driver.

The 10mm dynamic driver adds a slight boost to the bass, a little above neutral, and a reassuring thickness to the mids that makes the Fidue A73s sound full, if not quite as clean and transparent as the best at the price.

This is a very approachable sound. The bass doesn’t stomp over the higher frequencies and the chunkier tone competes well with noisy environments. While the tonal balance isn’t entirely flat, and isn’t meant to be, it’s not unbalanced either.

We do get the impression the two drivers aren’t perfectly integrated, though, a consequence of using the dynamic driver to add that extra bulk to the sound.

And while the lower frequency lift is sure to be a crowd-pleaser, particularly as it doesn’t roll off too much at the lowest frequencies, it does reduce the Fidue A73s’ insight.

These are good rather than truly great earphones. They’re solid enough to justify the price but don’t excel in any particular area quite enough to get us really excited.

There’s also a slight hint of sibilance to the A73s’ treble, although not enough to tire out your ears. You’ll likely only notice it if you’re listening out for weak points, but it does show there’s a slight lack of refinement in the higher registers.

The Fidue A73s are solid dual-driver earphones for people who don’t want to spend more than £100.

Their bass control is better than that of the RHA T10i, but you still get a thick tone with a little extra power to the low-end.

Insight and clarity are good rather than spectacular, and the treble could be slightly more refined. Just make sure you’re up for wearing your earphones with the cable running over your ears too, as that’s how the Fidue A73s roll.