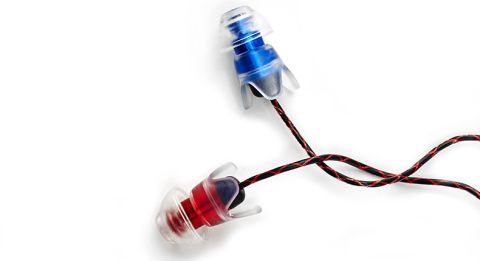 Fender might be the trendsetter when it comes to electronic guitars, but for the design of its Puresonic Wireless headphones, it has very much followed the curve of other ‘neckbuds’.

While there’s a substantial three-button remote on the left side for playback control, Fender has decided to put a similar looking block on the right that appears to do nothing else apart from display the company’s logo.

Fender fans might take some pride in having the brand displayed so prominently, but for everyone else, this seems a little unnecessary. For a product that will spend a lot of time hanging around your neck, any excess material is only likely to get in the way.

Similarly, we wish Fender had taken a smarter approach to the housings. Other headphones, such as the Beyerdynamic Byron BTs, have magnets on the back to keep them in place when not in use, it would be nice to see this feature on these buds too.

These Bluetooth headphones are compatible with aptX products – meaning that you can wirelessly receive ‘CD-like’ quality music at 16-bit/44.1kHz (with a compression ratio of 4:1 and a data rate of 352kbps.)

Their IPX4 proofing means you don’t have to worry about splashing them, and with a battery life clocking in at a claimed six hours, they should last the daily commute. They can be charged via microUSB, as is common on many headphones at this price point.

Unfortunately for Fender, ‘common’ also describes its sound quality. There’s nothing particularly objectionable about the Puresonic Wirelesses, but similarly, in playing it safe, there’s nothing to set them apart either.

When it comes to detail and insight, these headphones give an acceptable performance. We listen to a version of Vivaldi’s Four Seasons and while the drivers give a good rendition of the way the strings trill, it can’t pick up the texture of the instruments as well as headphones such as Beyerdynamic’s Byron BTs.

They struggle to really flourish when it comes to dynamics – leaving everything at a relatively similar volume rather than giving the orchestra gusto when it needs it or ripping away the sound when the musicians fade out for tension or solemnity.

For timing and organisation, these Fenders do an adequate job. Instruments are separated well, although we would like a little more space. But when a song gets complex they have trouble keeping up. Those who enjoy up-tempo music might find that these headphones have difficulty defining the beginning and end of each note as well as others do.

However, the Puresonic Wirelesses deserve some credit for their warm and clear reproduction of vocals. Millencolin’s No Cigar has a strong, pushy midrange, which plays to their strengths. The natural sibilance on Nikola Sarcevic’s lyrics is conveyed well, and in that respect it’s a satisfying sound.

At the bottom end, there’s a good amount of punch and depth, but we’ve heard a tighter and more detailed performance from others at this price.

Fender has a strong reputation in the world of rock music – mainly for heart-pounding beats and life-changing experiences as you mosh to your favourite band.

But that’s a quality that’s lost with these rather average in-ears, and unless you’re a fervent Fender fan, there isn’t any compelling reason to choose them.