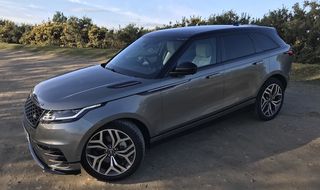 No, we haven’t gone crazy with the What Hi-Fi? credit card and built a new test rig – this particular system has been installed on four wheels.

The vehicle in question is the Range Rover Velar, a super-stylish and modern SUV with more attractive angles than you can shake a protractor at.

It features an all-singing, all-dancing set-up, designed with the help of British manufacturer Meridian. The company has designed optional systems right across the Jaguar Land Rover group, for models such as the F-Type, XE, Evoque and Range Rover.

MORE: Behind the scenes with Bang & Olufsen and the new Audi A8

With so many speakers dotted around the Velar’s interior, the Signature Reference System has you surrounded. In the front there’s a 25mm tweeter positioned in each A pillar and a 10cm midrange driver and 16.5cm bass driver in each door.

The rear uses the same tweeter/bass combination in the doors, but the midrange drivers are 2cm smaller.

A coaxial unit, combining midrange driver and tweeter, plays the part of centre speaker and can be found on top of the Velar’s dashboard in the middle.

If you’re sitting in the front of the Velar, look up and you’ll see a small, perforated grille next to each sun visor. They’re not just for show – behind each one is a 6cm speaker which acts as a height channel. The same units are also used in the roof lining, so passengers in the rear don’t miss out on the audio experience.

Key to this system is the use of Meridian’s Trifield sound-processing technology. This number-crunching tech takes a stereo signal and blends it into the centre and surround channels of a car for a more immersive and consistent sound.

Because this set-up features height speakers, the Velar uses a tweaked version of that tech, called Trifield 3D. Meridian claims the extra speakers, combined with the processing, allow vocals and instruments to be delivered with a more accurate sense of scale and location, giving a more realistic sound.

If you’re not convinced and want to experience the impact of the height channels and the extra processing, the Velar’s audio settings allow you to switch between the 3D and 2D versions of Trifield.

The system also comes equipped with DTS Neo X and Dolby Pro Logic II processing. DTS appears to emphasise the height channels more, while the Dolby mode shrinks the soundfield and moves it further away from the listener, towards the windscreen.

We find that Meridian’s settings give the best balance and a fuller, more organised soundfield. It helps create a solid wall of sound for the listener in which you’ll struggle to find any cracks.

The Signature Reference System is a relatively easy listen, perfect for long drives across the country. Play Sundarma Karma’s Young Blood and it communicates the energy of the track without issue.

There’s plenty of detail in the groove cut by the lead guitar, while the constant splashing of the high-hat sounds clear and crisp as opposed to hazy.

The height channels bring a light shower of information to help immerse the listener in the music. The effect can be quite subtle from track to track, but switch from Trifield 3D to 2D and you can hear the system switch perspective.

We take things down to a gentle canter with the melodic Run by Stephen Fretwell and the system changes tack. The presentation instantly sounds more intimate. The different elements that kick-start the track are neatly defined and placed in a clear, open, wide soundstage, and the refined nature of the track shines through.

The relaxed nature of the system gives it great all-round appeal, but that’s not to say we wouldn’t trade a fraction of that character for an extra dynamic gear. Some of the jumps from quiet to loud don’t quite have the desired impact.

Also, timing isn’t quite as accurate as other systems we’ve heard, but this doesn’t dampen our enthusiasm for what is still a very detailed, listenable package.

The Touch Pro Duo infotainment system is brand new for the Velar, and it’s just as alluring as the SUV’s exterior. Your attention is drawn to the two, 10in touchscreens stacked above each other to the left of the steering wheel. Powered up, it’s one of the most modern and eye-catching set-ups we’ve seen in a car environment.

Having said that, in-car systems are usually defined by how intuitive they are and the Velar, like so many others, is a bit of a mixed bag. The multi-functional steering wheel has controls for music playback and volume. They’re integrated into a single circular button that doubles as a touch-sensitive scroll-wheel.

Slide your thumb around the outer edge clockwise or anti-clockwise, and the volume goes up or down. If you want to skip track however, you need to press the relevant arrows on the opposite side of the dial. The combination of touch--sensitive and physical buttons feels strange at first, but you soon warm to it.

The screens are a big improvement, bringing extra sharpness, resolution and glossiness, but modern smartphones and tablets still have the edge when it comes to responsiveness. We found switching between menus was a little sluggish and jerky on more than one occasion.

Also, once the system shuts down you’re left with a reminder that glossy dark surfaces don’t really get along with greasy fingers.

The InControl operating system works in conjunction with the Land Rover InControl app. Plug your smartphone into the system and it brings up rows of apps on the Velar’s main display.

The whole arrangement looks neat and you can see the influence of Apple CarPlay and Android Auto in there, with a dedicated app for Spotify. But it still feels a bit clunky in use and not something you’d necessarily want to fiddle around with while you’re on the move.

The system doesn’t always register when our smartphone is hooked up via USB either, requiring a bit too much unplugging and plugging back in.

The infotainment system has its quirks, but they don’t detract from the sound. So many speakers might seem like overkill, but the Meridian system creates an environment in which you’ll be happy to sit for 10 minutes or 10 hours. For £2900, we’d definitely consider ticking the box.