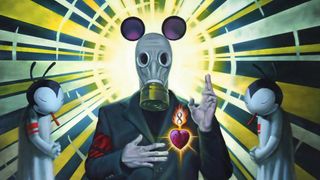 April Fool’s Day is something that sets humans apart from the rest of the animal kingdom: we’ve actually set aside half a day every year solely for the purpose of lying to each other. You can lie about anything you want, as many times as you like, and nobody can be angry with you as long as you start telling the truth again at noon.

But it isn’t only humans that lie, of course. Sometimes the things we create have a knack of tricking us as well, and music is no exception. We all love a good plot twist, but what about a track that lulls you into believing it is one thing, only to catch you out by darting in the opposite direction?

In this list, we’ve avoided those arrangements that change tack every 30 seconds – so we aren’t necessarily looking for multiple orchestral movements, hard-to-nail jazz breaks or the prog rock staples so beloved by all at your local hi-fi dealership – but gone for those with a definite style change, unforeseen rhythmic adjustment or sudden dynamic shift.

They’re all great for testing your system, too, so pop one on in company and watch to see how many ears prick up when you get to that bit.

Sit Down, Stand Up (Snakes and Ladders) by Radiohead

There is obviously a build throughout the introductory section of this track, subtle as it is, but if you were asked to guess what it led to before your first listen then the odds of success would be tremendously slim.

After three minutes of eerily sparse piano and repeated vocal lines, a few jabs of a synthesizer are all the warning you get of the oncoming cacophony of jungle-style polyrhythm that is swiftly joined by Colin Greenwood’s sprinting bass guitar line. It’s enough to trip up many a hi-fi system, at very least.

Find Hail To The Thief by Radiohead on vinyl at Amazon

Glitter And Trauma by Biffy Clyro

On Infinity Land, the last album before Biffy Clyro made the switch to chart-topping anthemic rock, Simon Neil admitted to willfully toying with his audience. This is the opening track on the record, with an electronic intro designed to trick listeners into thinking they’d bought the wrong CD, before it explodes into life with Biffy’s then trademark angular riffs and discordant harmony.

Elsewhere on the album, there’s a choral precursor to the most acerbically raucous track There’s No Such Think As A Jaggy Snake, and a hardcore intro/outro sandwiching what is in essence a pop song in The Kids From Kibble and The Fist Of Light.

Find Infinity Land by Biffy Clyro on vinyl at Amazon

Shake A Fist by Hot Chip

“Before we go any further, I’d like to show you all a little game I made up,” says the voice interrupting this belter from Hot Chip’s Made In The Dark. “This game is called ‘Sounds of the Studio’.”

The section starts off a bit like when you used to press the demo sounds on the keyboard during a music lesson, somewhat jarring against the body of the track that precedes and follows it, but nonetheless it works when taken in context of the rather eccentric band who decided to include it.

Mogwai’s extended instrumentals, often with long builds and repeated motifs, are hugely dependent on dynamics, and few shifts sting as much as the one in this track that closes their debut album.

It’s actually felt most, however, when heard on the band’s Special Moves live album. Not only is the chasm between loud and quiet seemingly more pronounced, the piece explodes into life for a second time, outwitting even those familiar with the original track from Young Team. The secret is not to turn your amplifier up too loud as the music dulls to near silence, lest you’re likely to blow your speakers.

Find Mogwai Young Team by Mogwai on CD at Amazon

Much of the beauty in Kendrick Lamar’s music is his refusal to be shackled by one style or genre, even within a single track. The change in m.A.A.d city is a seemingly simple shift of impetus, transferring from one rhythmic pattern to another, but it is one of those that’ll make you do that face. You know the one. The best part is the way it still hits even after your tenth or twentieth listens.

This track by Aaron Funk, otherwise known as Venetian Snares, doesn’t constitute much of a twist ending if you’re listening to his album Rossz Csillag Alatt Született in full, but heard in isolation it’s enough to make your gran spit out her teeth.

It samples various classical composers, including Bartók, Stravinsky, Mahler and Paganini, adopting a jazz-like brushed kit rhythm early on before careering into Funk’s trademark breakbeats about half way through.

Like Mogwai Fear Satan above, this is another album closer with a sudden change in dynamics. Decidedly less caustic than the aforementioned track, Safe Passage, from the album Wild Light, twinkles into being for its first minute or so before flooding the speakers with a tidal wave of warm synths. It is a euphoric ending to an atmospheric eight-song suite, like a dying star that celebrates its passing with an intense beam of light.

Find Wild Light by 65daysofstatic on CD at Amazon

Don’t bother scouring the internet for a stream of this one: it is a vinyl-only experience. Award-winning English composer Janek Schaefer’s 2003 release Skate was designed as a random-playing LP, with several lengths of groove marooned by blank vinyl, meaning the stylus would skate and skip between grooves free from the physical shackles of pre-determination.

In short, it’ll catch you out by not sounding the same twice, however many times you play it. If you want to make your own such record, you could make like Czech artist Milan Knizak, who painted and stuck tape on his records for much the same effect. Just don’t complain to us when you ruin your stylus.