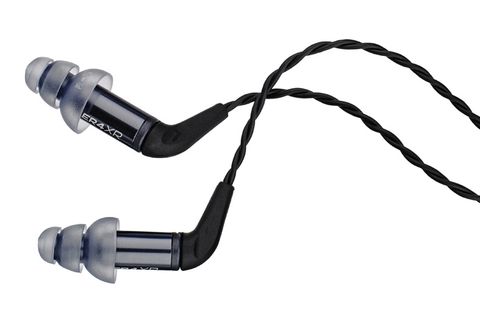 Slightly more forgiving balance makes the ER5XRs a little easier to live with than their SR siblings, but they’re still an analytical listen.

While Beats have cornered much of the headphones market in recent times, with their earphones designed to thrill at all costs, Etymotic is almost the polar opposite.

Etymotic headphones place accuracy above everything else - and if you don’t like the sound, that’s almost certainly the fault of your ears.

Etymotic’s stance is less hardline with the ER4XR than some of its other models, though. These are a bass-injected version of Etymotic’s top-end ER4SR (XR = eXtended Response, you see), taking the edge off the uncompromising precision without selling out the sound.

Aside from the model number on the cylindrical earpieces, the ER4XRs look almost identical to the ER4SRs. They’re small, elongated tubes that house a single balanced armature driver, much like the older ER4PTs they replace.

This new generation now has aluminium earpieces that can be separated from the cable. Pull the earpiece apart and there’s a MMCX connector, one of the few standardised connections small enough for the purpose.

Doing so too often isn't advisable: we’ve seen MMCX connectors become a bit loose in the past, but at least here the cable is kevlar-reinforced. The Etymotic ER4XRs come with a two-year warranty too.

The Etymotic ER4XRs' form is one of the few details (other than the price) that might put you off. The slim cylinders work their way deep into the ear canal, which feels invasive.

There’s a choice of foam or triple-flanged silicone tips, and the latter in particular can tickle your inner ear in a slightly disconcerting manner.

As these earphones are non-ported, the foam tips provide fantastic isolation, all-but unbeatable among universal earphones.

As with the ER4SRs, using the foam tips does change the sound, though, introducing a harder edge to the higher mid-frequencies.

The Etymotic ER4XRs also come with a microphonic noise-reducing shirt clip, 6.3mm adapter and a little tool to change the aperture filters (several are included).

These aren’t there to change the sound, but to avoid the inside of the earphone becoming clogged up. This is a real risk when the ER4XRs come so close to performing aural keyhole surgery on your ear canals.

A carry case is also included. It’s a relatively large fabric pouch that can hold all the bundled accessories.

The Etymotic ER4XRs fit won’t suit everyone, but their sound is likely to have a wider appeal than the ER4SR equivalent. These earphones take most of the the precision of that pair and add a few decibels of bass, giving the low-end greater impact.

They’re more fun-sounding, and more forgiving of lesser recordings, though still happy to reveal any shortcomings in the recording or partnering electronics The bass is still extremely taut, with zero bloat or resonance.

Those determined to own a pair of Etymotics should consider which they buy carefully, as unlike the older ER4P and ER4S the new models can’t be converted to the other’s signature. They have different drivers.

A little extra low-end power without sacrificing detail or accuracy may make the ER4XRs seem like a no-brainer, but the sound is also slightly warmed up.

The extra bass comes more obviously tied to the lower mids, reducing the independence of the midrange by a fraction. The trade-off is sound that’s a little smoother and more powerful.

The Etymotic ER4XRs' top qualities are the detail and definition of the midrange, rewarding the closest listening. While the soundstage is large rather than gigantic, the excellent separation and spatial precision mean you can dive deep into music just as much as when wearing a pair of full-size open-backed headphones.

The high frequencies are also well integrated and impressively resolved, just not super-bright. Overall, it’s an analytical and insightful sound.

The Etymotic ER4XRs take most of the excellent detail of the ER4SR and add a little warmth.

But are they better or worse than the SRs? That’s for your ears to decide. The most important aspect for potential buyers to consider is whether they can cope with the unusually invasive silicone tips.

See all our Etymotic reviews