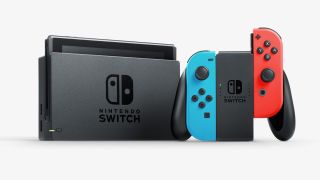 If you're looking for some extra entertainment at home, and perhaps even on the move, then a games console is a fine choice. And thanks to the affordable Nintendo Switch, a new console doesn't have to cost the earth. We've rounded up the best Nintendo Switch deals and Switch Lite deals so you can get gaming at the best price possible.

So why should you choose the Nintendo Switch? Because it's a unique console. While the various iterations of PS4 and Xbox One concentrate on raw power and a purely housebound experience, the Switch stays true to Nintendo's ethos and goes for pure fun.

As well as top tier games in the iconic Mario and Zelda series, the Nintendo Switch has an extra trick up its sleeve - it doubles as a portable games console. Slot the tablet-sized screen into the controller, and you can game on the go.

The Nintendo Switch doesn't output in 4K, and it can't run Blu-rays or DVDs. But this is a games console, pure and simple, rather than the heart of your home entertainment system.

The Nintendo Switch Lite is a cheaper version of the Switch and purely for gaming on the go. The Lite can't be used to play games on your TV, nor does it come with a dock. The Switch Lite screen measures 5.5in compared to 6.2in on the Switch. Both consoles output 720p HD resolution.

Now you know what you want, let's take a look at the best Nintendo Switch deals around...

Nintendo Switch Lite (Grey) £199 at Argos
The Switch Lite is is out of stock at many major online retailers but, at the time of writing, Argos appears to have a number of units. They're under £200 each – a bit of bargain given the demand. You can also add the excellent Paper Mario game for just £30 extra.View Deal

Nintendo Switch (Grey) with 6 months of free Spotify Premium £280 at Currys
This deal includes a host of extras. You get a Switch, two wireless Joy-Con controllers and 6 months of Spotify Premium. Plus, you can get £100 cashback when you buy a Switch and Virgin Media superfast broadband together.View Deal

Nintendo Switch Lite with Legend of Zelda £239 at Currys
Indulge your nostalgia gland with this modern remaster of the classic Legend of Zelda: Link's Awakening. You can pick it up for the same price as the Mario Kart bundle above, so the choice is yours.View Deal

The best PS4 deals: the cheapest console bundles you can buy