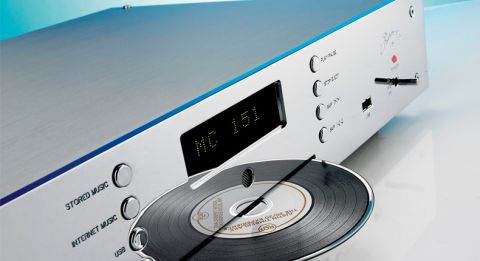 If you’re looking for a top class streamer, but still need high quality CD playback, then look no further. The 151 is it

The Burmester Musiccenter 151 is difficult to pigeonhole. It’s a streamer, server, CD player and ripper, all wrapped in one superbly made chrome-laden box. That’s a complex array of talents, but it’s easy to understand why the German high-end brand has taken such a comprehensive approach.

Most of its customers have built their systems up over a number of years, and are likely to have large CD collections. For these people it’s easy to simply replace their existing CD player with the MC151, rather than add yet another box for streaming music.

And rather than installing a home network set-up, the 151 with its built-in storage offers an easy solution. There are no compatibility issues and pretty much total stability as far as playback is concerned. Compared to a conventional network-based set-up, the 151 is as reliable and fuss-free as these things get.

That’s the heart of the Burmester 151’s appeal – it’s just so easy to use. You don’t have to be a computer expert to rip music into the built-in memory, or decide how best to configure the storage.

For a start, the Musiccenter has two 2TB modules, so there’s always a back-up of your music if one of these units goes wrong.

The built-in slot loading disc drive means that ripping CDs is easy. There’s a choice of two quality levels – very thorough and obsessively thorough, with the 151 happy to take up to half an hour to rip a disc. Scratched discs take even longer, as the player rereads the damaged sections to capture the maximum amount of music information. Such things can’t be rushed.

A recent firmware upgrade adds a Tidal app and also means the 151 will now work as a conventional (UPnP) music streamer too, able to render music stored on external NAS devices on the same network. It’s happy to cope with files up to 24bit/192kHz though the lack of DSD replay may bother some.

While a conventional remote is provided, any streaming operations are best handled with the dedicated app. The company supplies an Apple iPad Mini, preloaded with the app, in the box – that’s a nice touch.

The app isn’t the only way to control the 151. You can do that with a web browser on computer too, accessing the unit directly through its IP address. Google Chrome is claimed to work best for this.

The web route is the way to go for configuring the Musiccenter. There’s a range of things to fine tune performance, such as optimising ripping quality, activating the built-in volume control or setting output voltage to match the partnering pre or power amplifier precisely.

Such details may seem small, but they help to eke out the last few percentage points of performance.

This Burmester’s build quality is everything we’ve come to expect from the brand. The unit feels solid and is superbly finished, just as the price demands. Take a look inside and it’s clear that the company’s engineers have taken a great deal of care to get the layout and quality of the audio circuits just right.

You can link the 151 to your network wired or wirelessly – we always favour the former for its greater stability – and listen to music stored on USB devices through any of the product’s five ports.

There are balanced XLR and single-ended analogue outputs with the XLRs sounding a little bolder through our reference Bryston BP26/4B SST2 and ATC SCM50 combination. There are optical and coax digital outputs, in the unlikely event that you happen to have an outboard digital-to-analogue convertor that’s notably superior to the one fitted in the 151.

Surprisingly, there aren’t any digital inputs, which is a shame considering the internal DAC’s quality.

We start off by using the Musiccenter as a CD player and are pleased with what we hear. Its presentation has the refined, creamy balance we’ve come to associate with Burmester. Play a hard-edged recording such as Bruce Springsteen’s Terry’s Song and the 151 delivers a sound full of finesse and subtlety.

There’s plenty of detail here from the coarse texture of Springsteen’s passionate vocals to the precise rendering of the sparse instrumental backdrop. The Musiccentre’s refinement means that the hard edges of this demo-like recording aren’t exaggerated. The music always takes the limelight.

A move to streaming a CD rip of Stravinsky’s The Rite of Spring allows the 151 to impress even more. The piece’s vicious dynamic swings are delivered with force, composure and excitement, yet the confident 151 keeps everything under control.

We’re taken with the player’s sonic stability too. This is a massively demanding piece of music yet it remains easy to follow low-level instrumental strands.

We don’t notice any great difference in quality when using the 151 as a CD player or streamer. At all times it remains informative but refined. The tonal balance is slightly tilted towards richness at lower frequencies and smoothness at the top end. But this is never taken too far.

In absolute terms, resolution and transparency are top-class. Such a balance means poorer recordings and lower quality sources are more fun to listen to than they would be on a less forgiving alternative.

The MC151 is expensive, but it’s a fine high-end CD player and an equally pleasing music streamer. The on-board storage and the decent app make it a pleasure to use, even if the unit’s responses are just a touch sluggish on occasion, and it’s fair to say we’re convinced.

If you want a high-end streamer, but still want the luxury of playing CDs to a very high level, look no further.