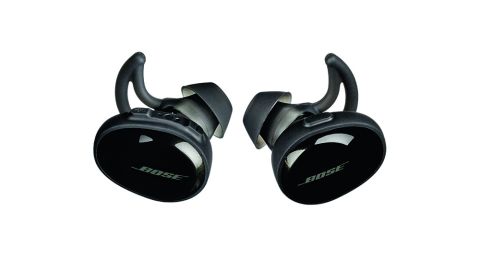 Cutting the cord and going truly wireless with a pair of in-ear headphones might be the ultimate in portable audio - but, in our experience, it’s tricky to execute.

Not only is it tough to generate excellent sound quality in such tiny spaces, manufacturers have to pack in extra components such as amplifier, battery (with acceptable battery life), Bluetooth receiver, mic and various controls.

And they have to present it all in a package that won’t make you look like a Cyberman. Are the Bose SoundSport Free wireless earbuds up to the job?

Built with sporty types in mind, the SoundSport Free in-ears are both sweat- and water-resistant, and have a suitably rugged feel to them.

Their appearance could be best described as chunky. They protrude from your ears a bit more than some rivals, and you could argue that some of the competition (such as the Sony WF-1000X) look both more stylish and more discreet.

The glossy Triple Black finish of our review sample is the most modest option available – the contrasting finish options of Midnight Blue or Bright Orange are a little louder, but not offensively so.

The SoundSport Free headphones are neatly held in place by Bose’s StayHear tips which feature little wings that rest against the inside of your ear for extra stability. They come in small, medium and large sizes, which means they should fit most ears (though one member of our review team found them uncomfortable after an hour or so).

Despite their obviously sporty overtones, the Bose SoundSport Free still have more than enough in their locker to appeal to gym-bunnies and casual commuters alike.

They boast five hours of battery life, which should be enough to get you to work and back and still leave enough in the tank for a HIIT session. The solid plastic carry case doubles as a charger and gives you an extra ten hours of power.

Drop the headphones into their relevant moulded slots and they’ll charge using the contact patches which run along the bottom of each earpiece. The headphones are held in place magnetically, so they won’t move around inside.

On the front of the case you’ll see a row of five LED lights. Press the release catch on the front and they’ll light up to show you how much juice is left.

You can’t physically switch the headphones off. Placing them in their case automatically cuts power but, if you don’t have the case to hand, you can use the Bose Connect app to set a timer to switch them off.

On the right earpiece there’s a full array of controls for playing music from your smartphone. While some rivals only offer basic track skipping and play/pause functions, the Soundsport Free earbuds offer these plus the ability to change volume.

The buttons are built into the top edge. Press the raised bumps at either end to move the volume up or down.

Press the flat surface between them once to play, pause or answer a call. Functionally it all works fine, although the volume buttons are a bit fiddly and don’t feel especially pleasant to touch.

To start the pairing process you’ll need to download the Bose Connect app for Android and iOS devices. The app walks you through each step, offering you the opportunity to rename the headphones and seek help should you have any queries about using them.

These Bose headphones also offer a feature called Find My Buds. It's similar to Apple’s Find My iPhone: if you happen to misplace either of your SoundSport Free earbuds, the app shows their location on a map and pings a distress signal if you’re in the vicinity.

While some earphones burrow into your ear canal for extra isolation, the Bose SoundSport Free buds manage to create a good seal without feeling like you’ve just undergone invasive surgery.

Unlike the Sony WF-100X, these aren’t noise-cancelling - so you will hear more of your surroundings, especially the higher frequencies. Whether this is a good or bad thing depends on your requirements.

Overall, the Bose SoundSport Free deliver a flavour much in keeping with other Bose wireless in-ears (such as the SoundSport Wireless). It’s a bold-but-balanced sound with rich and weighty bass.

The Bose SoundSport Free earphones deliver a solid and unwavering presentation which works well across a wide range of music genres. Highs aren’t wrapped in cotton wool, nor do they sound excitable or bright.

We play The Weeknd’s The Hills and the SoundSport Free show they don’t lack any low-end authority. The tune’s deep and foreboding bassline hits with serious force, driving the song along with a real sense of purpose. It’s tight and well-defined – the shifts in weight and depth are easy to differentiate.

Highs sound crisp, but the fact they’re a bit rolled-off means there’s no harshness to mess things up. Switch to Up Is Down from the Pirates of the Caribbean at World’s End soundtrack by Hans Zimmer and the headphones capture the swell of rolling bass and percussion superbly, delivering the song as a single entertaining package.

When we first tested these earbuds, our only issue was with connectivity - a problem not uncommon with true wireless headphones.  We found the left and right earpieces lost their connection to each other on numerous occasions. Thankfully, Bose has issued a software update, which seems to have fixed the problem, which is why we've upped our star rating from the original four stars to five stars.

The true wireless in-ear headphone market is booming at the moment, and the Bose SoundSport Free are good enough to give the very best a run for their money. They sound great and their array of features puts some rivals to shame.