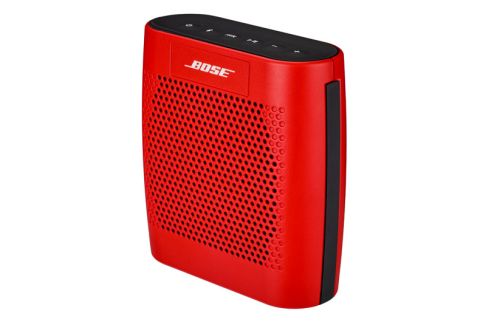 A little speaker from a big name, this Bose lacks the sonic charm to merit our wholehearted recommendation

The mere fact that you can own a Bose product for less than £100 should be enough to ensure the SoundLink Colour makes many a portable-speaker shortlist. And why not?

Bose undoubtedly has experience in this field and has long traded on the ‘big sound from a little box’ approach. We should be in safe hands…

…and the other way around. The Bose design fits nicely into your hand and it nudges the scales at a slight 570g.

This makes it eminently portable when carrying it into the garden, as well as around your home or office.

The shallow, rounded shape is also a great fit for rucksacks and suitcases, though some would welcome a bundled carry case – the bodywork does feel a little brittle and we reckon it would quickly pick up the odd scratch.

The rubberised top control section feels a bit more ‘Bose’, but for the price, overall build is fine.

Also acceptable is the level of specification on offer. An auxiliary input backs up Bluetooth connectivity, and enables connection of any old-school tech you may be toting.

The rechargeable battery, Bose claims, will give music breath for up to eight hours, and the package include a wall charger – one, which folds nice and flat, so should avoid snagging your best nylons next time it inhabits your luggage.

The Bose SoundLink Colour also offers ‘voice prompts’ when pairing. In action, this means it states the name of the portable device its hooking up with.

This is unlikely to prove a deal breaker to potential buyers, but it may well prove an attractive feature to visually impaired users. It’s also kind of fun hearing the speaker say your name, so no bad thing.

The Bose does not, though, act as a hands-free speakerphone so if that is a deal-breaker, you may as well leave the auditorium now – but please don’t slam the door on the way out.

For those sticking with us – and given our wholly conditional love of speakerphones we’d like to think that that’s most of you – we feed the SoundLink some tunes.

And initial impressions are good. Try Daft Punk’s Give Life Back To Music and lower frequencies flood the dancefloor.

This is the type of sonic character that causes visitors, initially, to stop and declare appreciation for your shrewd choice in portable speaker. (And who doesn’t like a bit of peer approbation?)

But, as we say, these impressions are ‘initial’. Take a longer, more considered listen to the Bose and you realise that the bass on offer, while large in size, lacks focus.

So Daft Punk’s Random Access Memories opener sounds big, certainly for the size of the Bose speaker, but it also lacks drive.

Lower frequencies are soft, lacking the agility to deliver the song with its usual bounce. This little Bose has slightly leaden boots.

Cast your ears higher up the frequency range, sticking with Daft Punk, and further issues appear. It sounds as if the Bose design team has played safe – way too safe.

Add to that the somewhat pedestrian bass and lack of pace, and overall presentation is only average.

Switch to Bat For Lashes’ In God’s House and the Bose delivers Natasha Khan’s vocals with good levels of detail.

It also, during sparser moments, projects her voice with clarity. But the moment the band puts the foot back down, that unwelcome, unvarying bass reappears, resulting in a less interesting, less emotional musical ride.

The Bose SoundLink Colour doesn’t go big on features. Nor does it Hoover up its design team’s budget in premium materials.

Indeed, for a little portable number from the House of Bose, it lacks the visual flair of many of its stable.

But at that £99 price, many would happily trade feature count and visual flair for an appropriate uplift in audio performance.

It doesn’t quite make good on this deal, however, and audio performance lacks the lower-frequency agility and upper end shine to maintain interest levels.

For such a colourful-looking bit of kit, this Bose sounds far too monochrome.