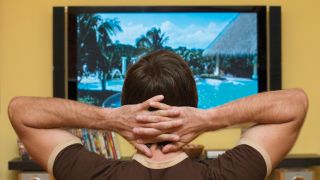 Sling TV was the first of the cable cord-cutting services when it launched in 2015, and, years later, it's still the internet TV service to beat in the US. The Sling TV price is lower price than most cable services and there's no long-term contracts either. The commitment is only on a month-by-month basis.

Not to be confused with Slingbox or Sling Media, Sling TV is an OTT or 'over-the-top' TV service which means that it comes through your internet connection rather than cable or satellite. Unlike most of our OTT services (YouTube, Prime Video, Netflix, Hulu, etc), Sling TV is a live TV service rather than video on-demand.

Just as with those services above, though, you don't need any special equipment to watch Sling TV. All you need is to download the Sling TV app (available on a host of devices you already own) and sign up to the Sling TV package that's right for you.

If you've not already jumped on board, then take a look below for all the information you need on Sling TV channels, packages and anything else you need to get started. There's a Sling TV free trial for seven days and, regardless, you can cancel at any point without worrying about being tied into an agreement.

Before we get going on the where's and how's of signing up to Sling TV, let's take a look and see what content the platform can offer.

The short answer is that there are no significant gaps in the offering. You can get just about anything you normally watch on cable through Sling TV. Sling TV channels include: ESPN, Disney, TNT, AMC, CNN, History Channel, Comedy Central, Cartoon Network, Cheddar, NBC, Fox, TNT, Food Network, Vice, USA, TBS and more.

If that's not enough, you can also purchase an NBA League Pass ($28.99/month) or a NBC Team Pass ($17.99/month), the latter of which offers access to Premier League football, Indycar, PGA Tour, cycling and rugby as well as other sports.

You can catch much of the NFL through NBC, Fox, ESPN, NFL Network, NFL RedZone and CBS.

Similarly, there are add-ons for other interests including a movie add-on, kids add-on, news add-on, comedy add-on and more. Take a look in the Sling TV packages section below for more details.

Take a look at the pictures below and above for a complete channels list of the Sling Blue and Sling Orange packages but, the broad strokes are that Sling Blue means missing out on ESPN and the Disney Channel while Sling Orange forgoes NBC, Fox, NFL Networks, Fox Sports, USA, SyFy, Nick. Jr and the National Geographic channels.

The only other catch is that Sling Orange supports on a single stream while Sling Blue allows simultaneous streaming from three different devices - worth noting if you live in a household with many people trying to watch TV on different devices at the same time.

Obviously, the easiest choice, and the one that Sling clearly encourages by price is the Sling Orange & Blue package where there's no need for compromise.

Once you've decided which way to go on Orange/Blue, it's then a question of choosing any add-ons and premium channels you might want. There are a whole host to select from and they change frequently, so it's well worth check on the Sling TV website.

If you're still missing some of your favourites, then you'll probably find them as stand-alone premium channel add-ons. These include Cinemax ($10/month), Showtime ($10/month), NBA League Pass ($29/month), NBC Team Pass ($18/month) and HBO ($15/month) among many others.

There's no equipment that Sling TV needs to send, so there are no set-up costs and no barriers to starting your life with Sling TV. For that reason, there's a seven-day Sling TV free trial if you'd like to get a taste of what the service is like.

Sling TV seven-day free trial
Sling-curious? Dip your toes in the water with the seven-day Sling TV free trial. Register with Sling TV, download the app and away you go. It's a great chance to test drive the channel choices with no hidden costs or commitments.View Deal

Sling TV recommends at least 25Mbps of download speeds and the free trial is a great opportunity to check that your house has what it takes. There are no commitments. You lose nothing if you want to cancel before the seven days are up and, even if you forget to cancel, Sling TV is only billed on a month by month basis with no long contracts involved.

Sling TV Happy Hour - free Sling TV from 5pm-midnight
Sling TV is offering free TV to Americans every day between 5pm and midnight local time. 'Happy Hour Across America' is essentially Sling Blue to new Sling TV customers for free, providing them with more than 50 live channels (including AMC, Bravo, CNN, HGTV and FOX News). Register your email with Sling TV and away you go.View Deal

Sling TV - $10 off the first month
Whether you want to go with Sling TV Orange, Blue or Orange + Blue, you can get $10 off your first month's subscription right now at Sling TV. Just sign up as usual and the discount will be applied. Take a look at the packages above to work out which is right for you and remember that it's easy to switch if you find you want different channels.View Deal

Sling TV: what devices is it on?