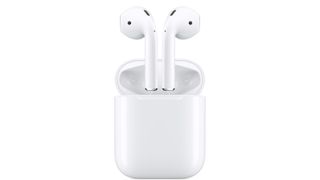 Apple didn't invent the category of true wireless earbuds, but you could be forgiven for thinking otherwise. Its original AirPods were such a runaway hit that, despite a few shortcomings, they were soon found in earholes the world over.

They were so successful that last year, Apple released a second-generation model, boasting improved sound and a newer chip for better performance. Though for better or worse, the design remained unchanged.

If you're wondering which to buy, or considering upgrading from the first-generation model to the second, then this is the page for you. We've broken down all the differences (and similarities) between the two models, so you can evaluate what matters most to you and make an informed decision.

And don't forget, when it comes to wireless earbuds, Apple isn't the only name in town. Check out our lists of the best AirPods alternatives and best wireless earbuds to see what other companies are offering.

To say the AirPods' design splits opinion would be an understatement. Some people love its simplicity, while others would prefer some buttons for easier control. But the bigger issue is the fit.

Neither the first- nor second-gen models come with ear tips. Some people manage just fine without them, while others find the tiniest of movements makes the AirPods fall out of their ears.

Even if they do fit you snugly, they still don't form as tight a seal as a pair of headphones with ear tips. This means that outside noise can sneak in, making the listening experience less immersive. It also means that if you're listening in a noisy environment like a train or busy street, you'll have to crank the music up louder to hear the fine detail over outside noise. Which could harm your hearing over time.

Apple has addressed both of these issues with the AirPods Pro, which add different-sized ear tips and noise-cancelling to the mix. But if you're buying either model of standard AirPods, you'll have to do without.

The first- and second-gen AirPods have identical designs, meaning these issues exist whichever one you buy. Apple has taken an 'if it ain't broke, don't fix it' approach, even though, for many people, the design was indeed broken.

When it comes to features, the AirPods really shine. They boast a flawless wireless connection that rarely drops out, if ever. Battery life is respectable, they charge quickly, and the earphones themselves are small and light.

The second-generation models are basically the same, only better. The W1 chip of the originals has been replaced by the H1 chip, which means faster pairing and switching between Apple devices, lower latency, better battery management for more talk time (but unchanged general battery longevity), and entirely hands-free voice control.

The 2019 model also has Audio Sharing courtesy of iOS 13. This lets a second pair of AirPods connect to the same iOS device as the first – all you do is tap the two iPhones together and both pairs of AirPods receive the same audio. Alas, this isn't available for the first-generation AirPods.

Siri can also let you reply to incoming messages using only your voice. Again, this is enabled by iOS 13.

The second-gen AirPods can come with a wireless charging case, or you can buy it separately. This works with both generations of AirPods, so owners of the first-gen model needn't miss out. Though remember, you will need a Qi-compatible wireless charging mat as well.

Perhaps the most noticeable difference between the original AirPods and the 2019 model is the volume: the second-gens are louder. This is a welcome change, as without ear tips to seal them in your ear, they tend to let outside noise intrude on your listening. A louder volume helps you hear more of a track's detail.

The sound of both models is typically Apple, with a natural, fairly neutral sonic balance and no artificially-boosted bass (for that, see the firm's Beats range of headphones). There's little to no manipulation here, just a stripped-back presentation that lets the music do the talking.

The second-gen AirPods build on this with more subtlety and sophistication. Low-level dynamic shifts are more granular and delicate, while the difference between quiet and loud is more pronounced and dramatic. There’s more detail to the delivery, too, and the presentation is a little more open and spacious. The timing is also better, meaning slightly improved organisation.

These might sound like minor improvements, and they mostly are. But they add up to something more than the sum of their parts, and make the 2019 AirPods sound noticeably more exciting and engaging.

The AirPods 1 kickstarted the wireless earbuds market in 2016, but they weren't the final word in sound quality. The AirPods 2 arrived on the scene and took performance to a new level. With more useful features and better sound quality to call upon, they are a clear step up compared to the originals.

Given their age, it's becoming harder to track down the AirPods 1 so if you don't already own a pair, we'd suggest going straight for the second-generation model. If you own the originals, then we still feel that the AirPods 2 offer enough, especially with the improvement in sound quality, to justify upgrading.