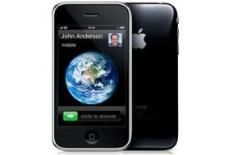 The new iPhone improves on its near-perfect predecessor, and at this price, Apple is on its way to taking over the world of mobile phones in the same way it did MP3 players

No company's products generate more fuss and lust from otherwise mild-mannered consumers than Apple's, and none of its babies have created as much excitement as the rulebook-redefining iPhone.

The original, which arrived on these shores last November, effortlessly combined the mobile phone, portable media player, and PDA into one ultra-stylish touchscreen device.

Enter the new, second-generation iPhone – not only is it cheaper, but it's better, too.

At first glance there's not a lot to distinguish the new iPhone from its predecessor: the back panel is now black (or, optionally, white on the 16GB model) instead of silver, and is more ergonomically curved for greater in-hand comfort.

Oh, and the much-maligned recessed headphone jack has also gone, leaving a standard 3.5mm access instead - just after every manufacturer had changed its headphone line-up to fit the old iPhone, too.

The biggest difference though, is the addition of 3G technology, which makes web-access twice as quick as the old Edge-toting model.This may not sound hugely significant, but when you're checking out the latest reviews on whathifi.com while perusing the shop shelves, you're really going to appreciate the extra speed, as you will when navigating to the nearest pub using the excellent Google maps.

And whereas the last generation iPhone triangulated your location using wi-fi and mobile phone masts, the new model adds GPS for greater accuracy.

The new iPhone also comes pre-loaded with iPhone Software 2.0, which adds the much-lauded App Store and extra sync-ability with PCs and Macs.

Earlier this year Apple announced that it was opening up the iPhone platform so that third-party developers could create software for its chic mobile. Now it's launched the App Store, which allows you to browse and download new applications directly to your iPhone.

Of the initial wave of applications, the most interesting and innovative include Loopt, which allows you to find iPhone-wielding friends using Google Maps, and Air Remote, which lets you control your entire home entertainment system via your iPhone.

Apple is also making a fuss of Super Monkey Ball, which sees you racing around colourful environments as - you guessed it - a monkey in a ball. The idea of using the iPhone's accelerometer (motion sensitivity) to control direction is intriguing, but whether it works in practice remains to be seen.

If you're planning on sticking with your original iPhone, the 2.0 software is available as a free download. With all of these additions, we'd have been happy if the new iPhone sounded identical to the older version, but what do you know? It actually sounds even better.

There's not a lot in it, but the second-generation model offers a slightly more open and punchy performance, with that extra bite being particularly beneficial to the pounding drums on our Apple Lossless rip of Great DJ by The Ting Tings.

There are many things that this new iPhone does identically to its predecessor though, and that's no bad thing. The gorgeous 3.5in screen remains, and produces terrific pictures, whether watching a downloaded movie or simply browsing the web.

It also operates in an identical way, that is, using the terrific touchscreen interface. At first it feels a little bizarre, but you'll soon be flicking and pinching like a pro.

Similarly, the onscreen QWERTY keyboard initially seems fiddly, but using it becomes second-nature quicker than you'd imagine. The only disappointing non-change is the camera, which remains a slightly old-hat 2.0 megapixel affair.

When you consider that on certain O2 tarifs you can even get the iPhone for free, you can see why we're so enamoured with this gorgeous gadget.