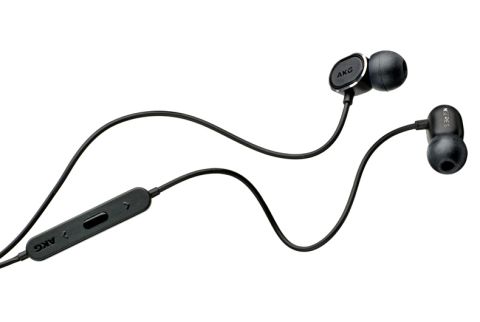 Almost an excellent pair of headphones, but let down by a slightly unbalanced presentation

When buying earphones, one of the key questions is how much you like your bass. The modern trend in headphones has meant that people's ears have become indoctrinated to bass-heavy sound, so much so that anything neutral appears a little thin.

However, these AKG N20s combine elements of a bassy headphone with a performance more associated with precision hi-fi pairs. And it works – mostly.

The AKG N20s are what might be described as 'normal' earphones. They don’t have multiple drivers, nor are they noise-cancelling or wireless. At £110, it also makes AKG’s claim of ‘reference-like' performance less likely to be manufacturers' hot air.

These are small, unassuming earphones. Their earpieces are aluminium, black but with a shiny bevelled edge for an eye-catching outline.

Oddly, the one piece of plastic is on the outer panel, the part most clearly on-show. It has the AKG logo on it, although as the AKG N20s are so small, you might not notice unless you get up close.

The one notable tech extra is packed into the AKG K20 remote, not in the earpieces.

On the back is a switch that flicks the three-button panel’s compatibility mode between iOS and Android, ensuring it works properly with almost any leading smartphone.

The back of the remote is a bevelled plate of aluminium, but the front part where the buttons live is plain black plastic. It's a slightly strange design choice; there doesn't seem much point in a snazzy streak of aluminium that's hidden by your t-shirt.

The AKG N20 cable is non-removable, but feels sturdy. Below the cable split, a tight fabric weave helps avoid tangling.

One other practical consideration is isolation. The AKG N20s have large bass ports on each earpiece, and while they don’t leak lots of tinny high frequency noise, isolation is at best fair. They may struggle on a noisy commute to work.

The bass ports are important, though, because the AKG N20’s drivers are quite small at just 7mm in diameter. Given some of the sound characteristics of these earphones, the port must work quite hard.

At first listen, the AKG N20s seem like typical high-end earphones - a clear and precise treble and upper mids, and a slightly bright character to the sound.

It’s not cutting or harsh, just the sort of precise performance we’ve heard from some higher-end AKG headphones.

The mid-range has a slightly dry tone, making vocal delivery often seem quite flat. But the amount of detail, even towards the lower mid frequencies, makes the N20s seem realistic, rather than lacking in smoothness.

As long as you’re up for some treble pep, there’s little to dislike about the upper half of the frequency range.

The lower frequencies are a little more unusual, thanks to the tuning of the bass port. These earphones don’t have the same excess of mid-bass some pairs use to sound rich, forgiving and thick. However, the power of the low/sub bass is incongruously pronounced.

This kind of bass is the most thrilling kind of all, but in certain tracks it ends up distracting the ear from the mids.

Central-channel vocals can sound hemmed into a small area of the mix by kick drums, bass guitars and other low-frequency instruments. It’s as if the AKG N20s' soundstage is too delicate to comfortably house the volume of low-frequency bass produced.

The sound isn’t ruined, but some of its best aspects have to compete with the sub-bass, and on some tracks it doesn’t stand a chance.

The AKG N20s combine laser-cut treble with an unusually powerful sub-bass. It’s a combo that delivers an unusual brand of thrills, not least because the definition in the higher frequencies stands up to ultra-close listening.

However, at times these two elements can appear to be at war with each other, making the performance of this pair of earphones more dependent on how a track is mixed than most. They’re never bad, but only intermittently great.