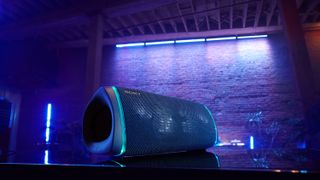 The market for portable speakers is burgeoning with box-fresh contenders to choose from. And as one of the biggest names in consumer technology, Sony's range of Bluetooth speakers could well be just the ticket.

Whatever your Bluetooth portable listening desires, Sony aims to have them covered within its Extra Bass speaker range. A trusted name in headphones and audio, Sony has a 10-strong Extra Bass (or XB) line-up, with retail prices ranging from the cost of a small round (SRS-XB01 and SRS-XB12) to a slightly more generous round (SRS-XB23) right up to the cost of a long-weekend away (XB501G) meaning there’s bound to be something of potential interest if you’re looking.

Searching for something super-easy to connect? Need a durable speaker that’s easy to carry, waterproof, dustproof – or all three? Is a 24-hour battery paramount? Ideally, you'd probably like a combination of the above. Or maybe you’re just after something that comes in taupe – because you like taupe.

Here's a list of the Sony XB key players, what they can (and can’t) offer, where to find the best deals and, ultimately, advice on whether you should actually buy one.

The XB01 and cute sibling, the XB12 (pictured) represent the smallest and most cheerfully budget-conscious of Sony’s Extra Bass Series. The latter is thoroughly Instagram worthy, at about the same width as a can of Coke, but half the height.

Both come in various colours, but while the XB01 is water resistant, the XB12 boasts an IP67 dust/water immersion rating (it's been tested for dust-proofing and can be immersed in water at a depth of 1m for up to 30 minutes and survive) bringing it right up in line with the UE Wonderboom 2 for durability but at a cheaper price point.

Both come with a fabric strap that can be unbuttoned to loop around things and you can pair two XB12s in stereo. Both are charged via microUSB, but while the XB12 claims a 16-hour battery, you'll only get six hours from the XB01 – not great, but better than the similarly-sized JBL GO 2.

Most crucially, the XB12 is a mid-2019 product – so check for deals. A quick check of the older models listed below reveals some top deals, provided you don't mind buying a slightly older product.

Let’s get this party started! The larger versions (XB32/XB33 and XB41/XB43) of Sony's funky XB speakers feature Live Sound, a sonic presentation supposedly suited to outdoor gatherings. The XB22, XB32 and first-gen. XB41 are slightly older versions of the Sony's newest lineup, the XB23, XB33 and XB43 – which now feature an IP67 rating, so they should perform no matter how dusty or drenched the surface. The latest speakers are even saltwater resistant, so the shenanigans can continue in the sea...

But that's not the only difference between the new and old guard. The new '3'-suffixed range features Sony’s newly developed X-Balanced speaker unit. Sony claims the unit’s non-circular shape maximises the area of the speaker diaphragm, increasing sound pressure for more punchy bass. The new unit also boasts reduced driver excursion while maintaining the same sound pressure, resulting in less distortion. For example, Sony says that the level of the sound pressure on the XB33 (pictured below) has increased by around 30 per cent and distortion rate is reduced by approximately 25 per cent compared to the predecessor model (XB32).

Unlike the circular diaphragm in a conventional speaker unit, the X-Balanced speaker unit in the largest of the new trio, the XB43, features an almost rectangular diaphragm. Its 2-way speaker system combines a woofer for low to mid frequencies with a dedicated tweeter for the higher range frequencies.

The X-Balanced speaker unit in the XB33 and XB23 features both this newly-developed non-circular diaphragm and an off-centre design, which Sony says also offers big sound while keeping the speakers compact in size.

The layout of the side passive radiators has also been optimised across all three models to reproduce a clear bass sound – its called the Extra Bass range, after all.

The XB32/XB33 and XB41/XB43 models also have light-up panels that you can customise in terms of colour and, er, flashiness, via the free Sony Fiestable iOS/Android app.

If we're partying, let's have it large. Our pick here is the XB43 (above). It's also the heaviest of the three newest models in terms of light shows and features, with an extra tweeter light that can illuminate to the beat of your music, plus a colour-change line light.

It promises to keep going for 24 hours, is water and dustproof and charges with the newer USB-C port.

Want another great feature? You can actually use the XB43 to charge your phone, thanks to a USB-A output.

The XB23 (above), the smallest of the new party-happy trio, is small enough to fit in the bottle-holder of your bike or the cup-holder of your camping chair, so if pedaling your own mini festival around town is your bag, the XB23 could be the one.

The XB23 is fully waterproof, dustproof and, while it can be beaten for battery life at just 12-hours, it promises loudness and EQ functions via the Sony app for competitive money.

Sony recommends a £100/$100 price-point, but thanks to this, its older sibling (the XB22) can be found a fair bit cheaper across several online retail sites.

The slightly bigger XB33 is a 2020 model (the XB32 is its older 2019 sibling) and it features a longer battery than the XB23, promising up to 24 hours of use. Again, you’ve got all the party features of the XB23, plus NFC fast Bluetooth pairing and you can charge your phone from it via USB-A.

The summer 2019 Sony model has almost the same dimensions as the XB33 but a slightly tweaked design.

If you know your JBL speaker range, the XB32 is the same size as the popular JBL Charge 4. As with JBL’s ecosystem, you can pair up to 100 Sony speakers together, but while JBL’s units need only be pressed once to find each other and sort the rest, Sony’s wireless chain set-up means you need to press each unit and then go in through the app to arrange pairing.

That said, JBL doesn’t offer basic EQ alterations via its app, where Sony's offers a plethora of sound enhancement and bass options. If you prioritise a customised sound over multi-pairing, a Sony XB speaker might be the wisest choice of the two.

And this is important: the new XB23, XB33 and XB43 speakers' pairing feature is not backwards compatible with older XB speakers, meaning you're limited to the new range or the old, to beef up the sound.

This is a fully waterproof and knock-proof cylindrical wireless Sony Bluetooth speaker with Alexa built-in. Again, it's from Sony's Extra Bass Series. The Sony XB402M has that same light-up panel design, an outdoor boost party-friendly function and, this time, Spotify Connect embedded as well as Alexa. Could it be your new smart-home hub? Well, not quite: Alexa voice calls aren't supported, and neither are a few other Echo exclusives. But with both wi-fi and Bluetooth connectivity, you’ll probably be able to bring Alexa out to the patio, get her to take care of the playlist and even complain to her when it starts to rain, if you like.

Sony recommends a £250 price-point, which puts the XB402M in direct competition with (and slightly cheaper than) Apple's five-star HomePod, but we've seen several deals positing it directly into Alexa voice-activated Sonos One price territory – another five-star product in our tests.

Should I buy a Sony XB speaker?

On paper, Sony XB speakers offer quality build and plenty of features at competitive prices. We've yet to get the range in to thoroughly test that extra bass claim (an especially bold assertion considering one is the size of a stubby Coke can), but the app's EQ functions plus the various light shows represent great value for money in a speaker – if you like that kind of thing.

Other Bluetooth portables at similar price-points may boast a longer battery life, but remember that they often fall away for features. Turn those lights off via the Sony app and you'll doubtless get a speaker that'll keep going for 24 hours.

While we can't vouch for the sound quality here, Sony has historically been a sonic stalwart across hi-fi and headphones, so we'd reasonably expect nothing less than a competitive performance even if they don't quite make it onto our list of the best Bluetooth speakers you can buy.

If you'd sleep better at night knowing you definitely had one of the best sounds for your pound, though, and aren't set on flashy (literally) features, you may want to play it safe and consider one of our tried-and-tested, five-star Bluetooth speakers.

Our best Bluetooth speakers 2020 roundup includes a range of Ultimate Ears speakers. The 2019 Award-winning UE WonderBoom 2 is a cracking performer in terms of both sound and durability. The larger Ultimate Ears Megablast expands on its sibling's fun and energetic sound and boasts Alexa voice control.

For those with slightly heartier budgets (and an inclination towards everything retro), we'd also heartily recommend JBL's boombox-like Xtreme 2, which is tough and rugged and has fun and excitement written all over it. For something in the JBL family that's smaller but still boasts a powerful, gripping sound, you can't do better for just shy of £100 than JBL's latest Flip 5.

JBL Charge 4: Is it any good? What are the best alternatives?