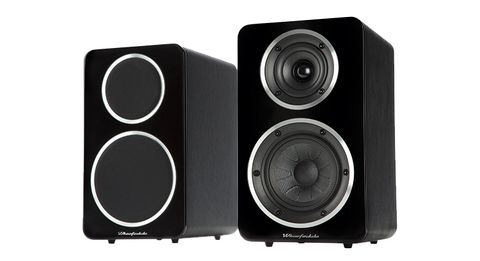 Many things require solid foundations to function – houses, marriages and cheesecakes to name but three.

With many of its recent speakers inspired by the successful budget Diamond 200 Series, you can add Wharfedale’s speaker engineering to that list too.

The 200s were the starting point for the mid-ranging Reva range, last year’s Award-winning DS-1 speakers, and now they form the basis of another two closely-related powered speakers: the A2 floorstanders and the A1 standmounts.

The A1s are based on the Diamond 220 standmounts and are 32cm tall and 19cm wide.

They feature the silver-coloured driver surrounds from the Diamond 200 Series, but also have nicely-rounded cabinet edges and are finished in black leatherette (with black or white baffles).

We think that this helps to give them a more mature look in keeping with the premium price tag.

The A1s come with a separate control hub that your sources can connect to – either via the hub’s optical, coaxial or RCA inputs, or over aptX Bluetooth.

It wirelessly communicates the music signal to the speakers over the 5.2/5.8GHz frequency band, avoiding the often-crowded 2.4GHz frequency for less interference.

However, Wharfedale’s ‘true wireless’ claim should be taken with a pinch of salt. It’s true that they don’t need physically wiring to one another, as some powered alternatives do, but both speakers need to be connected to the mains.

They also have to sit within a 20m range of the hub, which shouldn’t be a problem for most.

The hub is the size and shape of what could be a giant’s coffee coaster. It has touch controls on its top panel to change volume and input, adjust the tonal balance and update the software. The remote control makes performing those functions even easier.

Inside each speaker cabinet you’ll find a 50W amplifier. This drives a 13cm woven Kevlar cone mid/bass and a 25mm fabric dome tweeter. The tweeter sits in a dished waveguide to control dispersion.

The speakers have a few features of their own too, such as bass adjustment, and a mono mode so that they can go solo in different rooms – forming a basic multi-room function of sorts.

With a flick of a switch, each speaker can also act as the left or right channel in a stereo pair. We place them just over 2m apart, 30cm from a rear wall and slightly toed in towards our listening position.

Here, we strike gold, revealing the Wharfedales’ even, clean and detailed balance.

In Sturgill Simpson’s Oh Sarah, the plucked bass guitar line is deep and tuneful, the reverb insightfully intact, but it never threatens to overshadow what is a focused, well-integrated midrange.

We’re taken aback by the fullness of his vocals, which are as expressive as they are solid. At no point does the sombre string section feel sidelined, either; everything in the ballad feels balanced and fairly represented.

Mostly, the Wharfedales deliver on cue, although Imogen Heap’s The Listening Chair unveils an issue on the rhythmic cohesion front.

They get the structure of the album’s eclectic catalogue of domestic sounds, but they aren’t as convincing when it comes to tying them together.

They never sound even remotely subdued, but nor do they ever really let loose.

That sense of liveliness is absent when sourcing music from our Naim NDS/555 PS streamer or playing Sunflower Bean’s Human Ceremony from Spotify. You feel that the Wharfedales lean more towards finesse than fervour.

Using Spotify, there’s an understandable sense of compression in comparison to the higher resolution files we play, yet the A1s manage to keep above board when it comes to articulation, giving vocals enough space to peep up over the instruments.

A system built around the A1s is invariably going to be neater and simpler than a traditional hi-fi set-up.

While the A1s aren’t purveyors of the chirpiest sound they remain an option to take seriously.