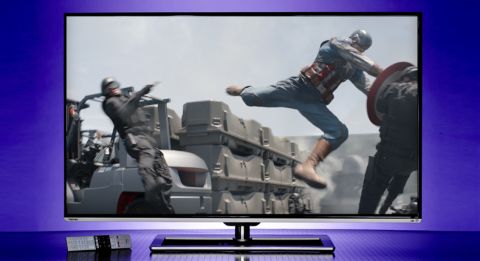 Timing can make all the difference. In the case of the Toshiba 58L9363, this test couldn’t have come at a worse time.

This is technically the company’s flagship range from 2013 – its 2014 TVs have yet to arrive. It goes up against the latest from rival companies, and comes away rather bruised.

We’ll start with the design, which is neat. We’re quite keen on the minimalist, skeletal stand that swivels (although our review unit was a little wobbly).

Sadly, the HDMI inputs aren’t built to the 2.0 standard, which means the set can’t accept 4K frame rates higher than 30Hz. It also doesn’t have the HEVC decoder found on newer sets, so Netflix 4K streaming is out.

There’s a single, rather large, remote control, which goes up against the two-remote policy adopted by recent TVs. That’s fine by us – some smart remotes are a little gimmicky anyway – but this one isn’t amazing.

Its layout is clear enough, but it doesn’t feel that ergonomic, and it’s not very responsive. Part of that is down to the TV itself, which feels sluggish in operation.

It doesn’t bode well for the more complex tasks that the circuitry has to face, such as faffing about on smart interfaces. That leads us to Toshiba’s Cloud TV platform.

It’s a fairly recent redesign, but it already feels a little dated. There are a few big apps – Netflix, BBC iPlayer, Deezer – but the offering is limited.

What about picture quality? Here, as in other areas, the Toshiba is outdone by rivals. We start with a server full of 4K stock footage and film clips, and the TV does a reasonable job in isolation.

There’s a decent amount of detail and colours are rich. Punchy, even. It handles contrast quite well too, but it isn’t as sharp or as subtle as it could be at times, and the colours seem overblown on occasion.

How about upscaling? We switch to a Blu-ray of Skyfall and the Toshiba’s weaknesses are more apparent.

This screen’s performance is punchy and vibrant, but Ralph Fiennes’ blue shirt looks less than natural, while his thinning hair isn’t as finely drawn as it might be

The picture is detailed, contrast is strong and there’s a sense of depth. There’s minimal judder, although a certain amount of image instability is often present.

We move down to standard definition and find the Toshiba really quite out of its depth.

The 2014 batch of 4K TVs have really upped their game in terms of upscaling and in comparison, the Toshiba’s output is softer, noisier and a lot less subtle.

This test has been a rough ride for the 58L9363. It might have been fine in last year’s company, but now it is outgunned in nearly every department.

You can buy better for the same money or less.