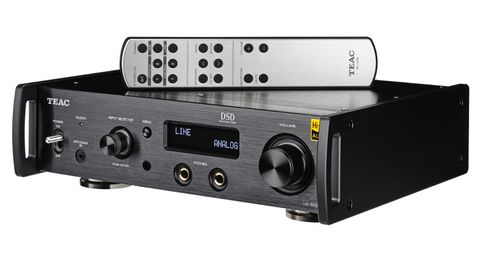 Well-equipped and easy to listen to, but sonically not a patch on the class leaders

With a killer storyline, a star-studded cast and a big-shot director at the helm, a film can have ‘film of the year’ written all over it, but slack execution can still turn it into a flop. It just goes to show that not everything that looks good on paper is as successful in practice.

It’s not difficult to apply this to the hi-fi industry and, more specifically, the TEAC UD-503 DAC/headphone amplifier. Its spec sheet paints a promising picture, alluding to its native playback of PCM files up to 32-bit/384kHz and DSD 256 support; its smattering of analogue and digital connections that mean it can slot into almost any system with ease.

At £700, it looks the part too. But with competition cutthroat in the sub-£1000 market, we can’t help but feel a little short-changed by its sonic execution.

We’ll start with the positives. With the TEAC in your hi-fi or desktop system, you’ll be greeted by a round, full-bodied sound with a likeable warmth and smoothness. Clear and balanced, the UD-503 embodies an easy listening quality that, if you are so inclined, will happily accommodate a Sunday run through of The Beatles’ discography.

Quick to grab your attention is its fleshed-out midrange, which errs on the side of richness and gives Kate Bush’s vocals a pleasingly lush character in Hello Earth. A deep-set solidity is noticeable from her first utterance, and there’s enough insight to communicate the lyrics’ emotional outpouring. Meanwhile, the male choral section sounds suitably big and ethereal.

That fullness extends to the staccato bassline in The Smiths’ I Know It’s Over, which is nicely plumped up and not afraid to make itself known, even though in absolute terms the TEAC’s bass response is a little on the soft side.

There’s plenty of room for experimentation thanks to two frequency cut-off DSD filters – one at 50kHz, another at 150kHz – and, compatible with files below 352.8kHz, four PCM options: FIR SHARP, FIR SLOW, SDLY SHARP and SDLY SLOW.

The latter is our pick over the filter-free presentation for its added touch of refinement, making the shakers in Trey Songz’s Cake sound a little purer and more detailed.

With our attention now drawn to baking, there’s a comparison here to be made with the TEAC’s detail levels. While the edges of notes tend to be crisp, it leaves out the subtleties and nuances of a song that really give you the whole flavour.

Compared to the competition, led by the Audiolab M-DAC (£600) and M-DAC+ (£800), it falls behind both when it comes to transparency.

Rhythmically, it trips up too easily too, getting tongue-tied in Hans Zimmer’s Cornfield Chase as the organ arpeggios dance around the densely-packaged pianos and synths.

The two Audiolabs aren’t caught out by the cacophony, sounding more disciplined and delivering a better impression of layering and space around instruments.

Switch to Janet Jackson’s That’s The Way Love Goes and the TEAC is the least rhythmically animated and precise, the Audiolabs carrying the track with better timing and more energy.

The interlacing rhythmic patterns don’t quite have that ‘togetherness’ through the UD-503, and the sinuous beat that should sound dynamic and punchy feels slightly held back.

That’s a shame because performance aside, the TEAC has a lot going for it.

While twin asynchronous AKM Verita AK4490 DACs control and sync the full-fat PCM and DSD audio signals using the built-in 44.1kHz and 48kHz clocks, an input at the unit’s rear means you can add a 10MHz external clock to upgrade the performance down the line too, though this kind of upgrade is more normally seen in recording studios, not domestic surroundings.

Those not in a position to upgrade right away will be more curious about the standard connections it sits alongside, of which there are plenty: coaxial, optical (both limited to 24-bit/192kHz) and line-level inputs for connecting it to an analogue source, and a single USB type-B input for a hook up to a computer or laptop.

A pair of RCA and balanced XLR outputs can connect it to your amplifier or, thanks to the TEAC’s preamp functionality by way of volume dial, active speakers.

Bluetooth has been left on the shelf, but the list of the UD-503’s connections doesn’t stop there. Located on the front panel is a combined mini optical/coaxial input for connecting portable devices, and two 6.3mm headphone outputs, which cater for balanced headphones or two pairs of regular single-ended headphones.

There is also the option of TEAC’s ‘active ground’ connection, which uses the same method as balanced connection, but is designed to suppress unwanted power supply hum.

The TEAC’s facade opts for practicality over cleanliness, with a combination of button, dial and switch controls committing to a pleasing retro styling that the company has strayed from in recent times.

They have a satisfying tactility to them – we like the gentle click of the input knob, the smooth, responsive volume dial and the definite action of the flick power switch, and on more than one occasion find ourselves using them over the remote.

That’s no fault of the remote though, which looks smart thanks to its silver metal face and simplistic button layout that doesn’t make things more complicated than it needs to. The system menus are easy to navigate using either.

In amongst the controls and connections, the off-centre OLED text display is big enough to read from across the room, and can be as bold or discreet as you want thanks to three brightness settings. Or it can be turned off altogether.

The half-width metal chassis may push its luck somewhat as a desktop DAC in comparison to the Audiolab M-DAC and Chord Mojo, but TEAC makes a valid point that its footprint is only around the size of an A4 size piece of paper.

It’s a solid, smart 4kg unit, even if its brushed metal finish – available in silver or black – is a little agricultural-looking with visible screws on every surface.

The rattling coming from the three base feet when you lift the TEAC might initially have you reaching for your screwdriver, but that’s all part of the design.

The spiked foot sits deep in a base plate below, with the idea being that balancing the chassis on pinpoints helps reduce vibrations and resonance.

The TEAC UD-503 will slip into any system and play ball with any file you throw at it, but its lack of transparency and rhythmic ability makes it a hard product to recommend – not least when Chord and Audiolab have better-sounding (and more affordable) rivals vying for your cash.

See all our TEAC reviews