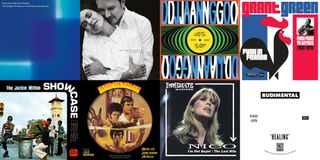 As much as we love Record Store Day, with over 500 vinyl records going on sale - many of which are produced in seriously limited numbers - it can be tough deciding what’s worth standing in line for.

That’s why we’ve scoured the list of releases to pick out some of the finest songs the music world has to offer. These are songs that are not only musically brilliant, but are engineered and mastered in such a way that they truly test a hi-fi system.

Check out 11 of our favourite songs below. And, if you’re after whole albums, we’ve got a guide for that too. Happy hunting!

Django Django - In Your Beat

In Your Beat is the sound of the 80s as imagined by folks too young to have been there, presented for Record Store Day 2018 as a 12-inch, 45rpm single with the original version, an instrumental and two exclusive remixes. Timing and tempo management are all here (well, that and midrange fidelity), making this an ideal record for turntables like the Pro-Ject Essential III.

The Durutti Column - Bordeaux (from the album ‘Another Setting’)

‘Another Setting’, the third studio album released in August 1983 by British band The Durutti Column, is getting the full Record Store Day treatment. Available In in a limited edition of just 800 copies, 'Another Setting' comes complete with a second disc of live and unreleased material. It’ll have to go some to better the first disc’s Bordeaux, a typically simmering and shimmering slice of northern art-pop that’s perfect for showing off the timing and tonality of a good turntable.

Brian Eno and Kevin Shields - Only Once Away My Son

Vinyl is made for music like this. 'Egghead by appointment' Brian Eno has collaborated for a second time with My Bloody Valentine's volume dealer Kevin Shields, resulting in the double-A side single The Weight of History/Only Once Away My Son. It’s remarkable that so little seems to happen during these songs, yet they're packed with more texture, motion and colour than most musicians’ first LPs. It’s the aural equivalent of a flare illuminating the darkness.

First Aid Kit - You Are The Problem Here

Far more forthright and furious than First Aid Kit are widely presumed to be, You Are The Problem Here, a #metoo-flavoured slice of protest, is a sweary barnstormer presented for RSD18 in a live reading that is, if anything, even more livid than the studio recording. Let it loose on a good turntable to hear the the song’s full attack and surprising dynamism.

'Funk In France: From Paris To Antibes, 1969-1970' consists of three 180gm LPs limited to just 2000 copies. The album documents a couple of Francophone gigs by jazz legend and all-around master of the guitar Grant Green. The virtuosity and good taste on show in I Wish You Love is exactly the sort of thing turntables are built for, where the warmth of Green’s tone and the instinctive fluidity of his playing is given full expression.

A 7-inch extended play single that turns at 33.3rpm, with two tunes per side - we want it already. And that’s before considering the dancehall potential of the fulminating Disco Jack. Few Kingston, Jamaica venues would have enjoyed the luxury of a high-end hi-fi system, but that’s no reason not to get your skank on to this heavyweight classic with one of your own.

Can you feel the weight of history? Featuring a pre-Velvet Underground Nico, I’m Not Sayin’ was the very first single released on Andrew Loog Oldham’s Immediate Records in August 1965 and features contributions from Brian Jones and Jimmy Page. The song itself is a classic Gordon Lightfoot track that's been entirely appropriated, reshaped and reimagined. Listen to it on a turntable like Essential III SB, where the integrated speed control makes switching from big 33.3rpm discs to cheeky little 45s like this as easy as you like.

It’s no mean feat to make a complex arrangement sound simple, nor is it easy to make a complicated melody sound straightforward. So hats off (and dancing shoes on) to Rudimental and Joseph Angel, who may have delivered the most club-friendly release of all the whole of RSD18. Welcoming, insistent and summery, Healing is seven-and-a-half minutes of music worth throwing some al fresco shapes to.

Lalo Schifrin - The Gentle Softness (from ‘Enter The Dragon’ o.s.t.)

Lalo Schifrin was the master of the jazz/funk/big-band mash-up. His storming soundtrack to Enter the Dragon has it all in abundance - and throws some choice dialogue in to boot. We’re particularly keen on The Gentle Softness, which is - surprise surprise - gentle, soft and multi-layered. Only a truly capable turntable can properly reveal the interplay between flute, muted trumpet and wonderfully mellow vibraphone.

Arriving on white vinyl for the first time, David Sylvian's 'Dead Bees On A Cake' album features an extraordinarily subtle and contemplative piece in which Sylvian’s keyboard and guitar pads form an undulating bed for the inimitable Shree Maa to sing her words of praise and devotion. Restful and provocative all at once, Praise reveals its charms at a leisurely pace. Get your headphones on, make yourself properly comfortable and shut out the world.

Frank Wilson - Do I Love You (Indeed I Do)

The Holy Grail for Motown and/or Northern Soul fanciers, no more than five copies of Do I Love You (Indeed I Do) are believed to be in existence - until now, that is. Rely on Jack White’s Third Man Records to turn out purple vinyl 7-inch pressings of this stomper, complete with Motown’s test-pressing ‘Quality Control’-stamped brown cardboard sleeve and a label with a facsimile of producer Norman Whitfield’s handwriting. Due to its highly collectible nature, this isn't a record you want to play too too often, so be sure to make a digital copy.