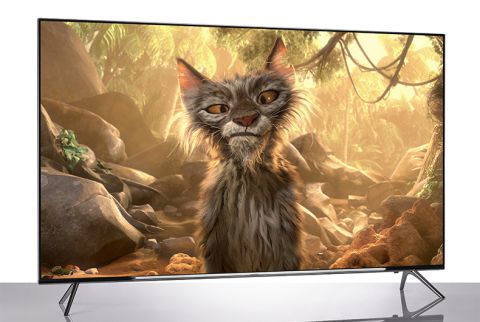 Remarkable picture quality at a reasonable price - what isn't there to like?

Towards the end of 2015, Samsung had a massive party. We don’t know this for certain, but we reckon it’s a safe bet. When you dominate the entire TV category at the What Hi-Fi? Awards, you don’t go home and look at etchings. It stands to reason that the team must have celebrated hard before taking a well-deserved holiday, perhaps.

Or maybe not. As we take a first look at one of Samsung’s 2016 TVs, we get the impression that the next day in the lab was business as usual. Instead of getting complacent, the company’s next product to arrive in our test rooms is evidence of yet more hard work.

This is the Samsung UE55KS7000. It is the junior member of Samsung’s elite SUHD squad, which sits at the top of the range. Bottom of the top tier. Far end of the VIP table. But however we look at it, that translates as top tech for less.

All of which means the KS7000 qualifies for a UHD Premium sticker, the industry standard for serious TV specs. On top of that, Samsung has liberally sprinkled its own magic.

The KS7000 uses ‘Quantum Dot’ technology, another name for the Nano Crystal tech we saw in 2015, which promises over a billion colours. That’s 64 times more than conventional rivals, according to Samsung.

Then there’s the design, which is certainly not rushed. A ‘Boundless’ frame (a very thin bezel) means there’s not much to distract you when you’re looking at the screen.

It’s a slim set, thanks to the edge-lit LCD panel and the external One Connect box, which houses most of the inputs (four HDMI, three USB).

A 360-degree design means every effort has been made to ensure the TV is pretty all the way round. There are no visible screw holes, which is a bonus, even if we don’t know anyone who deliberately walks around the back of their TV to seek out imperfections.

Here’s something new: the feet don’t require the usual screwing that accompanies most televisions. All you do is slot them in until it goes ‘click’. Or at least that’s the theory. On our review unit, one foot clicked into place but the other would not catch, falling out as we lifted the TV.

It’s not an issue in situ, although we wish there were an option to position the feet closer to the centre of the screen. We don’t all live in showrooms with huge benches for the TV to sprawl across.

Finally, a word on the smart stuff. Last year, we felt Samsung’s Tizen-based operating system was aesthetically similar to LG’s lovely WebOS interface, but in practice lacked its smoothness and refinement. Samsung has taken this criticism on board, and the revamped interface is much better.

Everything still revolves around a pop-up bar, which houses all the apps and menus – only it is now a lot more intuitive, thanks to a nice layout and handy shortcuts. It’s much faster, too. Waiting time is the death of any operating system, and thankfully that has been minimised.

The Smart remote control has been redesigned. It has the usual problem of being a little on the simplistic side, but it is more ergonomic and nicer to handle than Samsung’s previous efforts – and the most important keys, for volume and channel control, are pleasant to use.

Time to play. We begin with 4K, streamed from Netflix and Amazon Instant Video. The picture is sharp as you like, but we’re impressed by the TV’s subtlety. It’s not the artificial, etched quality you get with shop demonstrations. There’s enough definition to count the individual raindrops on a windscreen, plus the clarity needed to make out the accompanying condensation.

Then there’s the 4K on Ultra HD Blu-ray, provided by a Panasonic DMP-UB900. This has the advantage of HDR, and we are very impressed by the contrast offered.

Now, a UHD Premium certification does not always mean retina-melting levels of dynamism. The KS7000 doesn’t have the outright impact of the flagship Panasonic TX-65DX902, but that’s not necessarily a bad thing. What you get is remarkable subtlety. Instead of solar brightness and abyssal blacks, you get fine increments of shade. Shadows offer different levels of murkiness. You can quite easily make out the outer part of a shadow (the penumbra, for those in the know).

The same subtlety applies to colour. Skin tones are realistically varied, even around the awkward contours of chins and cheekbones. The same applies for paint on cars, with their varying angles. The subtle colour not only makes for a more convincing image – it helps to add a sense of depth.

There’s no 3D here, as Samsung has decided to kill off the feature. Though little-used and largely unloved, this will frustrate anybody with a 3D Blu-ray collection.

On to Blu-ray for a bit of 1080p, and the KS7000 proves to be an excellent upscaler. There is the expected drop-off in quality from the 4K feed, but with Fargo, the TV does a good job of defining tyre tracks on snow, as well as Steve Buscemi’s teeth, while retaining the subtlety of contrast and colour. Even without the benefit of HDR, clothing is rendered with strong dynamism and convincing depth.

Standard definition is somewhat fuzzier, as expected, but we’re impressed by how well the KS7000 copes. It is perfectly watchable. Despite the massive drop in detail, sharpness is impressive, and there’s little evidence of picture noise.

If we had to pinpoint an area of weakness, we would nominate the sound. While it’s balanced and has a decent weight, never approaching the sort of hardness we’ve heard from many slim TVs, it is not the most substantial.

It’s more than good enough for everyday viewing, but if you’re after a fuller movie experience, we might suggest some reinforcement in the form of proper speakers, or at the very least a soundbase or bar.

Samsung won five of our Awards last year, including our TV Product of the Year gong. It certainly hasn’t rested on its laurels, but has made use of its momentum - and the result is nothing is nothing short of spectacular. If the Samsung UE55KS7000 is anything to go by, Samsung may be in for another party.