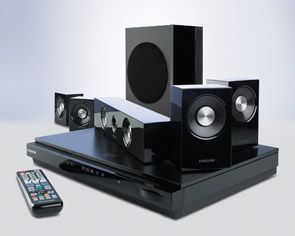 There’s a lot to be said for this affordable system; not the best in class though

Recently we reviewed Samsung’s HT-D6750W, an all-singing, all-dancing 3D Blu-ray-in-a-box system boasting seven channels of fancy 3D surround sound and equipped with all the bells and whistles you could wish for.

Here, we find ourselves at the other end of Samsung’s home cinema spectrum, with the entry-level HT-D5100.

As with many systems, the HDMI output doubles as an ARC (Audio Return Channel) so, with a compatible TV, you can enjoy terrestrial broadcasts in surround sound.

There’s no iPod dock, but you can connect an iPod via the USB input on the front of the receiver. There’s an ethernet socket, but wi-fi connectivity is an optional extra.

No HDMI inputs
The biggest hole on the D5100’s spec sheet is the absence of any HDMI inputs. And there’s only one optical digital in, so if you’ve got an Xbox and Sky+ HD you’ll have to choose which one takes priority.

Theoretically, you can call upon Samsung’s Musical Auto Calibration (MAC) system to ease any set-up pains. But it’s very inaccurate.

The jingle to help take measurements sounds disturbing enough, but we were more dismayed to see the speaker distances for the subwoofer and surround speakers way off the mark.

Far better to invest a few pounds in a sound pressure level meter and input all the measurements manually.

Decent selection of Apps
Your online experience is delivered through Samsung’s Smart Hub. Here, you can search for and access a multitude of apps, games and content providers including BBC’s iPlayer and Google Maps.

Facebook and Twitter apps ensure you’re never more than a few clicks away from updating your status.

‘Inoffensive’ sums up the Samsung’s sound rather nicely. As Harry and Hagrid try to evade the Death Eaters in Harry Potter and the Deathly Hallows, the D5100 does a decent job of creating a stormy, dramatic atmosphere and picking out detail for the listener.

As our heroes are attacked from all sides, the D5100 throws effects between channels well enough – although the top systems do it with greater precision and subtlety.

Clear sound, good pictures
Dialogue sounds clear, but perhaps not as natural as when heard through the Panasonic or LG systems.

Bar the odd flicker there’s very little to grumble about with picture quality. With Blu-ray, the Samsung is on a par with the majority of systems at this price.

During Bill and Fleur’s wedding in Harry Potter, the system shows good contrast between the colourful dresses and darker suits. Edges are sharply drawn although the top systems make more of the subtle costume details.

Motion tracking could be more stable with 2D and 3D content, but it’s not a major slight on overall picture quality. DVD playback is a step down in quality, which is to be expected, but the D5100 still holds its own in terms of resolution.

Yes, it can be bettered, but the Samsung is still a credible option – and a cheap one at that.