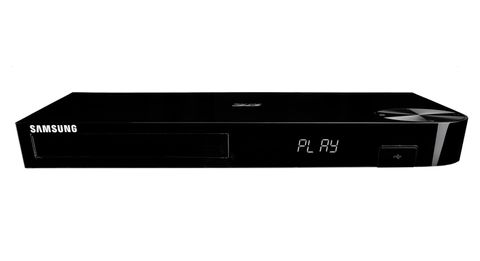 Not the best in class, but those features make it competitive

You can trust Samsung to cram a lot into its kit. The Samsung BD-H6500 is the company’s current flagship Blu-ray player, and it’s brimming with top content and features. The company is clearly out to tick as many boxes as it can.

We begin with what makes the Samsung stand out, which actually has little to do with playing Blu-rays. We’re talking about the smart content on offer. Samsung is the only company to offer the full selection of the UK’s catch-up services on its Blu-ray players.

BBC iPlayer is on everything these days, but you also get 4oD, ITV Player and Demand 5. Netflix is the other ubiquitous one, and it is joined here by Amazon Instant Video. These are the biggest names in video streaming, so if that’s your thing the Samsung is already in your good books.

It’s all presented very neatly, with an updated interface divided into four sections. ‘Disc’ and ‘Apps’ are just that. ‘Multimedia’ is where you’d find content from your memory stick (there’s a USB port), and ‘Movies & TV’ is where you’ll find Samsung’s very own on-demand content.

This thing is fast. Starting up takes under 10 seconds, and Blu-ray loading feels almost as fast as it is with DVDs. The remote’s buttons, some of which glow in the dark, are also very responsive. This is a joy to use.

MORE: How to... get catch-up TV, on-demand video and streaming movies

In terms of connections, it’s pretty standard for a budget Blu-ray deck: HDMI out, LAN, digital optical out. What’s unusual is the ability to work with Samsung’s M7 and M5 multi-room wireless speakers. Stick in a CD here, listen to it over there.

It’s hard to deny the Samsung’s prowess as a multi-media beast, but it’s time for the crunch, so we load up a Blu-ray. It’s an impressive picture. Images are sharp. Colours are vibrant and punchy, but well balanced.

Contrast is strong, and we’re happy with the clarity on hand. Motion could be a little tighter, however (we catch a little judder here and there). Detail is good. Switching to 3D, it’s a similar experience: the sense of depth is convincing, and there’s little ghosting or crosstalk. We switch to a DVD and the Samsung’s upscaling skills are fine, with little picture noise.

But it’s the sound that lets the Samsung down; it’s not very big. We switch between the Samsung and the Sony BDP-S5200 a few times and the Sony offers a far greater sense of scale. The Samsung also often sounds hard and insubstantial.

It’s almost full marks for the Samsung BD-H6500. It scores highly for features and usability, but its performance isn’t quite class leading. It’s still impressive, though.