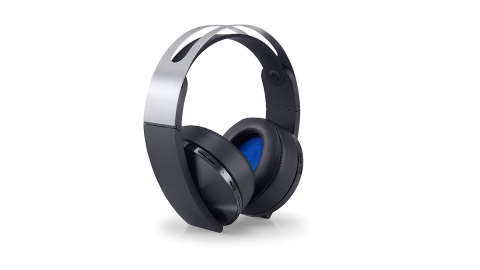 The headline features fall a little flat, but the core sound quality more than makes up for that

Here’s a sad truth: most gaming headsets are pretty awful – even the more expensive models. As price goes up, you may get a few extra features, but the core sound quality tends to remain fairly low, with a tendency towards overbearing, woolly, ill-defined bass.

We have tested headsets costing over £300 that sound markedly worse than many £50 pairs of ‘normal’ on-ear headphones. But the good news is that there are still some gems to be found, and the shiniest of all is the PlayStation Platinum Wireless Headset.

Before PC and Xbox gamers stop reading, it’s worth bearing in mind that this official PlayStation headset will work with your games machine of choice, too. You might have to do without some of the fancy features, but they’re not the reason you should buy the Platinum Headset anyway. You should buy it for its excellent core sound quality.

As well as bucking the gaming headset trend for poor audio, the PlayStation Platinum Wireless Headset also eschews the common over-the-top design. There are no throbbing lights, garish colours or twinkly embellishments here.

Instead, this is a classily understated pair of over-ears that could easily be mistaken for a pair of ‘normal’ headphones. Only the blue fabric on the inside of the earcups and two small PlayStation logos give the game away. Even the most self-conscious gamer should have little worry about using these as a pair of regular, out-and-about headphones as well as a gaming headset.

While the styling is nicely grown up and the overall look is classy, the headset feels a little less luxurious to the touch, with plastic being the most used material. However, the fit is excellent. The cups are large enough to completely surround all but the most elephantine ears, and they create a decently noise-isolating seal without too much pressure being exerted on your head.

The earcups are ringed by buttons and switches for power, volume, adjusting the audio/chat mix and switching on or off the headset’s surround sound features. They are virtually indistinguishable from one another to the touch, so even after months of regular use you’ll find yourself having to remove the headset find the button  you’re after.

As the name suggests, at its core this is a wireless headset, with a bundled USB dongle acting as transmitter. That transmitter only works with PS4s, PCs and Macs, but a 3.5mm audio cable in the box means that Xbox One, Nintendo Switch and smartphone gamers can also get in on the action – and also means you can use the headset as a standard pair of everyday headphones.

There are two big advantages to using the Platinum Headset with a PS4: bespoke sound profiles for specific games and 3D Audio for a handful of first-party titles such as Uncharted 4: A Thief’s End, Horizon Zero Dawn and Days Gone. Information such as battery level is also integrated into the PS4’s user interface, which is a nice touch.

But those who aren’t on a PS4 will still benefit from the Platinum Wireless Headset’s greatest strength; its sound quality.

Stick to simple stereo sound, whether wireless or wired, and you get a crisp, punchy and balanced performance. There’s more than enough weight and punch to the bass but, unlike many gaming headsets, it isn’t a muddy, monotone morass and doesn’t overwhelm the midrange and treble. This is proper bass with definition, energy and tunefulness.

It is an exciting delivery, but never shrill or bright, and there’s a neutrality that means you hear your game’s soundtrack more than the character of the headset – always a mark of quality audio kit.

There’s a lovely balance of directness and spaciousness to the sound, so central effects and dialogue are delivered with plenty of intensity but exist in a three-dimensional soundscape that lends plenty of atmosphere to the action.

Of course, you may be tempted to enhance the atmosphere by switching on the VSS (Virtual Surround Sound), but that would be a mistake. While it opens up the soundstage and gives a sense of surround sound you otherwise don’t get, it also sounds over processed and unnatural, with voices and effects such as footsteps going distractingly awry.

However, it is worth activating 3D Audio when playing a game that supports it. While there are still some occasions when the sound seems a little unnatural, voices in particular, the surround sound effect is much more convincing than VSS, with strong spatial placement of effects that seem to extend above and below you. Some will still prefer the unprocessed stereo delivery, but if you’re playing one of the few games that does support 3D Audio, it's well worth giving it a go.

The only other thing to consider before opting for the Platinum Wireless Headset is that its hidden microphone picks up more room noise than the stalk-mics of many rivals, so your online gaming friends won’t thank you if you play when other people are chatting in the background.

You may be drawn to the PlayStation Platinum Wireless headset for its promise of Virtual Surround Sound and 3D Audio, but the former is pretty poor in action and the latter is available on only a handful of games.

It’s good news, then, that the core audio quality is so good – miles ahead of the competition, in fact. If you’re a PS4 gamer in need of a headset, this is the one to get, and even PC, Xbox and Switch players should seriously consider it. We’ve not heard a better alternative.