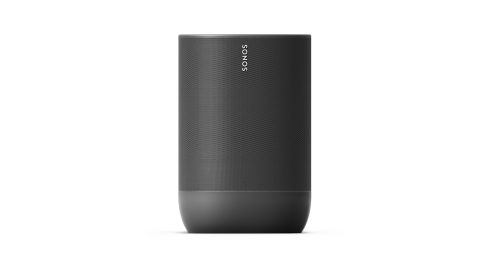 While Sonos has had the multi-room market sewn up for the best part of a decade, the company has looked on while portable Bluetooth speakers from manufacturers such as JBL, Ultimate Ears and Bose have taken the outdoor world by storm.

Until now, Sonos owners have lacked a speaker that can be taken into the garden to soundtrack a party, or even just to the bathroom to keep them company. But Sonos has now made its move – literally.

The Sonos Move is as much a Sonos wi-fi speaker as those before it – you get network music streaming, multi-room and voice assistant – but it also goes where no Sonos speaker has gone before by boasting a built-in battery and Bluetooth.

However, if you were expecting a battery-powered, Bluetooth version of the Sonos One, think again. Physically, the Move towers over the One. Compared to the majority of portable Bluetooth speakers, and indeed anything Sonos currently offers, it is relatively tall (24cm) and heavy (3kg).

We can’t imagine many people will be throwing it in their luggage and taking it away on holiday. It's more suited to becoming a semi-permanent fixture in a room of your house and taken for occasional spins in the garden when the weather permits. Or, indeed, when it doesn’t.

The Move is IP56-rated dust and water-resistant, meaning it should be protected from ‘harmful dust’ and ‘strong water jets from all directions’. That’s not the only new design trait to accommodate the Move’s portability either. A recessed area around its rear that your hand can slide into means that, despite its size and weight, it is fairly easy to move around. The Black Show finish (slightly lighter in shade to the traditional Sonos black) has supposedly been chosen as the best finish in terms of heat and UV resistance.

Elsewhere, the Move shares enough of the brand’s design DNA to slip comfortably into its current product line-up. The gently curved sides and metal grille are trademark Sonos, although the silicone rubber covered section at the bottom that houses the speaker’s down-firing tweeter and new wave guide does rather stand out. Both the tweeter and mid-bass driver are brand new designs, custom made for the Sonos Move (Sonos doesn’t carry existing designs across to new products) and each powered by its own Class-D amplifier.

The top panel features touch-sensitive controls and a mic button, plus an array of six small pinpricks where the microphones are housed. To be precise, only four of the holes are actually used for the mics, the other two are there for ‘visual balance’, according to Sonos.

Below the rear 'handle' you’ll find a row of three buttons. Press and hold the top one and it powers up your speaker; tap it and the Sonos Move goes into suspend mode to preserve battery life. The middle button, meanwhile, switches the Move from wi-fi to Bluetooth mode, while the bottom button connects the speaker to your home network during set-up.

The headline features here are the addition of Bluetooth and a rechargeable battery. The Move supports the standard AAC and SBC Bluetooth codecs, although it’s a shame aptX or aptX HD don’t feature on the menu for higher-quality Bluetooth transmission – especially as Android smartphone support for those codecs is on the rise.

But this is a wi-fi speaker first and foremost, and we are pleased that Sonos has taken the opportunity to improve its wi-fi reliability. Sonos claims that the Move boasts its ‘best wi-fi performance so far’, which should reduce the chances of any signal drop out, even when you are using the speaker outdoors.

The second USP is the Move’s battery. Sonos says a full charge provides around 10 hours of playback, and during our testing period that claim appears to be fairly accurate. We listened on an average of 60 per cent volume, though bear in mind the higher the volume the quicker battery will deplete. A one-hour charge restores the battery back up to around 50 per cent, while three hours should see it fully refilled.

The alternative to plugging a USB-C charging cable directly into the Move is sitting the speaker within the supplied charging ‘ring’, which plugs into the mains and barely expands the Move’s footprint. All you need do is ensure the two contact patches on the bottom of the Move match up with those on the edge of the ring.

You wouldn’t expect to have to replace the battery inside a £399 portable speaker anytime soon, but Sonos has designed the Move so that the battery pack can be swapped for a replacement when the time comes – which Sonos says should be about three years or 900 charges. Rather than send the speaker back or fork out for a new Move, all you need do is pull a silicone rubber strip away on the underside of the speaker, remove a couple of screws and swap them out. It’s nice to know the option is there when you inevitably need it.

Despite its additional features, the Move is still, at heart, a Sonos wi-fi multi-room speaker. The Move harbours all the streaming smarts and app support of its siblings – direct access to over 30 music services, including Apple Music, Amazon Music, Spotify, Tidal and Deezer. You can add full compatibility with Sonos's own app to that list, as well as Spotify Connect and Apple AirPlay 2, voice control via Google Assistant or Amazon Alexa, and even the ability to link two Moves in a stereo pair. They can’t be used as home cinema surrounds with a Sonos Playbar, Playbase, Beam or Sub, though.

An internet connection is still required to unlock most of these features, including auto Trueplay, a new version of Sonos' automatic calibration technology. Integrated into Sonos speakers since the Play:5, the software traditionally optimises the sound performance based on the speaker’s surroundings with the help of an iPhone or iPad. The software has been revamped for the Move, mainly because, due to the way the Move will be placed on different surfaces and in different environments, its sound can't simply be tailored for one scenario.

With auto TruePlay, it's the Move speaker itself that carries out the measuring and self-calibration. It uses its microphones to measure the frequency response of its surroundings – similar to the way that Apple's HomePod adjusts its sound to its environment.

The fact it's automatic means it is triggered whenever the Move is placed in a new location. Move it from your lounge to the garden, and once it has had around 30 seconds to process its new surroundings, the audio performance will be re-calibrated accordingly. Sonos says it continuously refines the sound when the speaker is stationary too.

We were given a demo of this by Sonos that involved the Move being moved from a shelf and placed inside a drawer which, while a far from realistic listening set-up, provided an extreme scenario for the speaker. Sure enough, after a while we could hear the balance of the Move’s sound shift so it sounded more at home in the drawer.

During testing, we move from our soundproofed test room to a noisy office environment and outdoors. The speaker’s real-world transformation is audible, the Move never sounding out of place once it reconfigures itself. When outside, there’s a definite sense of the Move’s sonic presentation opening up while retaining the clarity and balance of its indoor performance, which is typically Sonos.

Pumping out tunes next to one another, the Sonos One and Sonos Move share much more in common sonically than they do physically. Both could be described as weighty and full-bodied, with a tonality that’s nicely even-handed and not bereft of solid, deep bass.

As you might expect from a larger speaker, though, the Move’s presentation gains in size, scale and space, as it leverages that sizeable driver to its advantage. Play Violent Femme’s Blister In The Sun and the acoustic strumming and terse drum strikes have more room presence while the accompanying instruments and eclectic vocal are allowed the whole room to wallow around.

It’s capable of much louder volume levels too – think garden party levels – and crucially complementing that is its ability to keep composed when pushed to its limit. You can expect similar sonic satisfaction from Bluetooth playback too.

The Move can carry a tune as well as the next Sonos speaker, although when placed against the class-leading rival, the Apple HomePod shows them both how it’s done. We play Frightened Rabbit’s The Oil Slick, and the HomePod is the better mover, driving the song from its rhythmic foundations to its hearty vocal with greater impetus and cohesiveness.

Despite sounding naturally more claustrophobic compared to the bigger Move, as is the case with the One too of course, the HomePod is unmistakably the more convincing entertainer – and it’s £120 cheaper too, though mains powered and therefore not as portable.

Sonos’s first venture beyond the home turns out to be a bit of a surprise. While many, including us, would have expected something like a Sonos One with a battery pack, or possibly something even smaller, more portable and more affordable, few could have predicted that we’d get something bigger and more expensive than the HomePod.

But all things considered, we’re not quite as moved as we might have been. For the Sonos fan who’s been longing for a do-it-all speaker that’s as at home in a garden as it is in a bedroom, the Move is pretty much ideal.