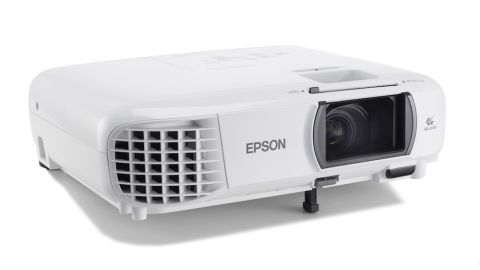 Once again, Epson offers big-screen delight on a budget

Though 4K home cinema projectors no longer exclusively carry eye-watering price tags – you can pick one up for around £1000 – it will be some time before they trickle down to the £500 mark currently occupied by budget Full HD projectors such as the Epson EH-TW650.

But technological progression, such as that from Full HD to 4K, puts extra pressure on ‘last-generation’ kit to deliver even more for less. Which is exactly what this modest, yet accomplished, Epson does.

Apart from its 1080p resolution, nothing about this Epson is second rate. For anyone looking for a display capable of up to 300 inches on a budget, the EH-TW650 is an easy projector to endorse.

Its 3100-lumen brightness and claimed 15,000:1 contrast ratio mean this projector is capable of beaming images to a screen that are bright enough to be clearly seen in a day lit room. It displays images with reasonably good contrast, bright whites and dark blacks.

The claimed 11-year lifespan of the Epson’s lamp is based on an average use of 1hr 45mins every day and the lamp set in Eco mode. You can also make use of the Epson’s built-in wi-fi to beam media from a smartphone via the iProjection app.

The only notable specification missing from the EH-TW650’s spec sheet is 3D support, which its sibling, the EH-TW5650, delivers for £750.

Weighing 2.7kg, the Epson’s modestly-sized white chassis is largely frills-free, and its plastic on-unit keys and manual controls – two sliders to open/close the lens and correct keystone, and zoom and focus dials – are further reminders that you’re paying for functionality over flashiness. But importantly it feels well made and up to the task of lasting 11 years on your shelf.

Two HDMI inputs, and VGA, component and USB connections provide means of connecting a source, and a remote control is included in the box making it easy to browsing settings – a practicality we’d urge you to do.

The picture menu is a gateway to making adjustments including brightness, contrast, colour saturation and sharpness, as well as several image enhancement modes, which we prefer off.

What defines the character of the picture the most, however, is the ‘colour mode’, of which Cinema, Bright Cinema and Dynamic are your options. We prefer the former’s rich-yet-realistic palette, although we imagine some will favour the punchier tones and extra brightness offered by Bright Cinema, which certainly suits lighter environments.

We’ve watched Blue Planet II in 4K many times since it came out on Ultra HD Blu-ray, but this time, using the standard Blu-ray disc, the Epson’s delivery doesn’t make it look quite as tantalizing as we’ve become accustomed to.

Still, the series of landscapes are as much an advert for the world’s stunning coastlines as they are the Epson’s fine sharpness and colour reproduction. The Epson captures the splendour of the production. Seals glisten in the sea, and there’s lots of detail in the startlingly close-up frames, and stability in the camerawork as landscapes are panned and schools of fish darting from predators are tracked.

Those with DVD collections will benefit from the Epson’s decent upscaling – it maintains clarity, colour richness and depth to decent levels – although we notice some noise creeping into its 720 x 480 delivery.

It’s acceptable for the most part, but even after playing with the settings, we still can’t iron out the slight instability of the subtitles of French horror film Raw – which slightly hinders our enjoyment. In most cases, the minor instability won’t be an issue, but it’s one to be aware of.

Otherwise this Epson is pretty faultless for its price tag. So if you’re ready to make the switch to an entry-level projector, and want a competent bargain to play Full HD and SD material while you save up for a much pricier 4K model, the Epson EH-TW650 is a fine choice.