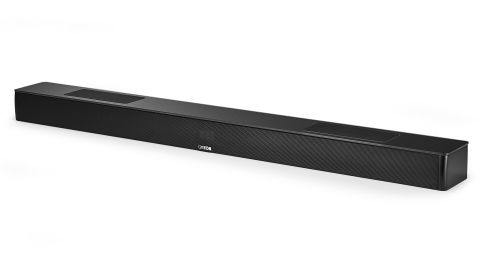 It's spacious and room-filling, but this Dolby Atmos soundbar is too short on clarity and finesse to be able to recommend it

Dolby Atmos has become a key technology in soundbars, and it’s what puts the Canton Smart Soundbar 10 at the top of the company’s TV soundbar range.

Inside the Soundbar 10 are eight drive units, two of which convert to full-range Atmos speakers when compatible content is detected, allowing it to produce a 2.1.2 virtual surround sound effect.

This technology comes at a price, though. Take a look at our best Dolby Atmos soundbar selection and you’ll see only one is below £1000/$1000. The Canton Smart Soundbar 10 breaks that barrier too, but it still needs to offer the soundbar basics of clarity and a good dose of musicality for us to be able to recommend it ahead of cheaper, non-Atmos models.

Fortunately, it has some other tricks up its sleeve to help justify the price, including four HDMI ports, built-in Chromecast, Spotify Connect and the promise of 3D room-filling sound.

At just 7cm high and nearly a metre long, the Canton Smart Soundbar 10 is designed to sit underneath a modern TV without getting in the way of either the picture or the IR remote control sensor.

Finished in a smart lacquer and glass combo, it comes in a choice of either black or silver and has a series of touch-sensitive controls on the top.

You’re likely to use the small but sturdy remote control for most of the functionality. This brings direct access to the playback modes, equaliser settings and wireless Bluetooth, as well as media playback, but takes a little getting used to when using it to navigate the basic on-screen menus. The small display on the front gives some visual feedback on your selections in the form of blue LED lights.

Inside the soundbar, there is an impressive eight-driver array with a total of 300W of amplification. There are two 19mm fabric-dome tweeters, two 50mm aluminium midrange cones and four 79mm upward-firing woofers, two of which convert to full-range drivers during Dolby Atmos playback to add a greater sense of height – the result is a 2.1.2 virtual surround sound system.

Of course, not everything comes with an Atmos soundtrack, so there’s also decoding for Dolby Digital and DTS Digital Surround formats. At the rear, there are plenty of connections, including four 4K-enabled HDMI sockets (three ins and one out). There’s also ethernet (as well as wi-fi), optical, coax, analogue inputs and an output for an external sub.

Setting up the Canton Smart Soundbar 10 is a more complicated process than usual for a soundbar. The on-screen menus allow you to choose the listening distance, ceiling height and device height to optimise the soundstage for your viewing position. You can also fine-tune it by adjusting the actual and virtualised channel levels as if it were a 5.1.2 system, although it works well enough out of the box for this not to be absolutely necessary.

Connecting it to your network is simple enough and, once set up, it automatically updates its firmware whenever available. Chromecast compatibility makes music playback from an Android device simple and Spotify Connect is also built-in. It all works smoothly enough and with minimal lag. There's no on-board microphone for voice control, though.

You also get hi-res music capabilities – up to 24-bit/192kHz files over HDMI and 24-bit/96kHz over wi-fi – and streaming through the likes of Spotify, Tidal, Google Play Music, Deezer and TuneIn either over Bluetooth or Chromecast.

You can also set the Soundbar 10 up in a multi-room system with other Canton Smart Series products, including a subwoofer, an AV amp and several pairs of active speakers, both floorstanders and standmounters.

We put a 4K copy of the Dolby Atmos-encoded Alien: Covenant into our player and sit back to enjoy the film.

From the start, it’s clear that this soundbar offers plenty of scale for a modestly-sized unit. There are deep, forbidding growls as the titles appear, these then give way to an open soundstage that matches the screen as Peter Weyland activates David.

Everything from David’s bare footsteps to the sounds of the Steinway concert grand piano come across with an echo from the large, sparsely decorated, white room but the Canton can’t quite manage the same level of analysis when we switch to the interior scenes of the spaceship. There’s no closed-in feeling to the sound and the scene lacks its usual claustrophobic tension.

As we reach the busier action sequences, we discover a few bigger flaws too. We get the big, deep noises of the lander craft’s thrusters as the remaining crew try to shake-off an alien, and there are some worthy spatial effects as it flies overhead from left to right. However, much of the rest of the audio of the scene is hidden in the chaos.

There’s too much of a tonal bias towards the bass sounds and little detail on offer elsewhere. Dialogue and on-screen actions, such as a snarling alien and a cable being winched, are all but consumed by the bigger, hard-hitting sounds. There’s not enough insight into anything higher and midrange-pitched – and that impressive range of drivers isn’t agile enough to stop the audio from becoming murky.

Dynamically, this soundbar is lacking too. It’s clear as we switch to some music with the Live Aid scene at the end of Bohemian Rhapsody. There’s not enough of a difference between the sound of Freddie Mercury calling out and the 72,000 people responding. As broad and high as the soundstage is, it just doesn’t sound like a huge stadium.

When the band kicks in, there’s a shortfall in the music's drive. The drums sound distant and small, and the lead guitar comes across more like a background instrument. Considering the efforts that Canton has gone to with this sensible and practical device, it’s a real pity.

We try out the Stereo and Music modes and things improve a touch. We play Hunky Dory by David Bowie and there’s enough musicality to enjoy Changes and Oh! You Pretty Things, but Bowie’s voice is still short of definition and feeling. It could quite happily entertain you and your guests as background listening at a party, but for anything more demanding, it doesn’t quite make the grade.

This Dolby Atmos soundbar certainly delivers on its headline promises. The Canton Smart Soundbar 10 will open up the breadth and height of your TV’s offering and provide body-shaking hits in the process. Its smart capabilities are usable and handy, too.

There are limits to its sonic ability, though. In terms of balance, dynamics and clarity, it feels a long way behind other soundbars at this level, and even those a fair bit cheaper.

We’ve enjoyed other Canton home cinema products in the past but, unfortunately, this one doesn’t quite meet those standards. It’s big and bold enough to create room-filling sound, but we’re not convinced that it’s a sound worth filling your room with.

How to choose the right soundbar