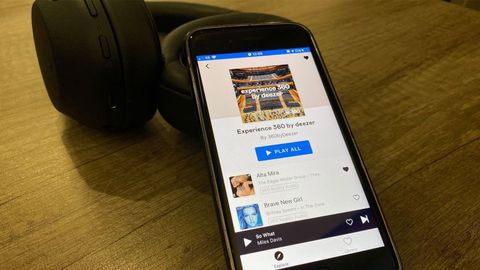 Deezer's neatly executed app immerses you fully in the world of 360 Reality Audio, but only time will tell if there's enough quality content to support the format.

360 Reality Audio is Sony’s new object-based audio format and Deezer is now offering this new content to its subscribers.

But, instead of opening these tracks up in its standard app, Deezer has actually decided to launch a separate streaming app, 360 by Deezer. And we were invited down to Deezer’s London HQ for a guided tour, plus the chance to experience a selection of 360 Reality Audio tracks first hand.

360 by Deezer is available for iOS and Android devices, and comes complete with a flashy new logo to differentiate itself from the standard Deezer app. Open it up and you’ve got a catalogue of 360 Reality Audio tracks at your fingertips.

Now, Deezer could have just sewn 360 Reality Audio content into its standard app, but the streaming service has opted for quite a sensible approach, removing the possibility for any confusion and giving the format and its content a platform to grow from.

Deezer also sees a separate app adding extra value and exclusivity for subscribers to its HiFi tier - that’s right, you’ll need to be a Deezer HiFi subscriber to access this app and all the 360 content it can stream.

Just because there’s a new app to get to grips with doesn’t mean the user experience needs to be compromised. And Deezer’s app designers have tried to minimise the impact by allowing you to access all your favourite tracks and playlists stored on the standard app through 360 by Deezer.

The standard app automatically syncs with the new one, so there’s no need to jump between them if you want to switch from a 360 Reality Audio track to a standard stereo stream.

Power up 360 by Deezer and the main menu allows you to jump straight into the action. You can search by artist or album or you can head to “experience 360 by Deezer”, a playlist designed by Deezer to allow you to experience some of the best 360 Reality Audio tracks available. It’s all relatively clear and easy to follow, whether you’re a seasoned Deezer user or a first-timer.

Click on an artist and you’re taken to a quick preview page that has all available albums at your disposal. Click on an album, pick a track and away you go.

Handily, any compatible tracks boast a 360 Reality Audio logo in the bottom left corner of the album artwork, just to let you know that you’re listening to the real deal.

Tap the audio settings at the bottom left of your screen and you’re presented with three different options: Standard, Improved and Optimal. These relate to the three quality levels of 360 Reality Audio available.

And streaming is the only way you can experience 360 Reality Audio. You can’t download the tracks to your device for offline listening. This does seem a little strange for a mobile app, where users aren’t always going to be on a stable network. Deezer has confirmed this feature isn’t off the drawing board completely, though, so it might make an appearance further down the line.

Deezer provides us with a pair of Sony headphones - the WH-XB900N wireless noise-cancellers - and we fire up the app. We kick things off with Marvin Gaye’s Sexual Healing, listening to the standard stream before moving on to the 360 Reality Audio version.

And what we hear takes a little getting used to. You’re so used to having traditional stereo sound fed into your earholes, that hearing something in 360 feels almost alien. The stereo version sounds comforting, safe and familiar but there’s so much going on with the 360 Reality Audio mix of this track, which just makes us want to keep listening.

You’ve got backing vocals high up and to the left, then the main vocal which is delivered front and centre. Next, you’ve got the percussion that pops into view at the far edges of the soundfield, with the occasional ping of a triangle punctuating the space over your head.

There’s loads of space and openness for the different objects to operate although a slight trade-off does appear to be the sense of weight and body, especially in the bass. It’s not necessarily off-putting, but makes us want to switch tracks to hear how other tracks in the 360 Reality Audio catalogue fare.

Next up it’s a live version of Reasons by Earth, Wind & Fire, and the first thing you get is the roar of the crowd which again sounds big and expansive. You can imagine 360 Reality Audio mixes could really help you experience the atmosphere of live recordings. There isn’t much bass to the track so it feels a bit top-heavy, but there’s a decent amount of detail.

We switch to Britney Spears’ Toxic, and it’s a slightly different story. The 360 song doesn’t have quite the same impact. The presentation feels a little flatter, lacking some of the scale and openness of the Marvin Gaye track.

Of course, we don’t expect every song to sound identical in its positioning of objects but it’s going to be interesting to hear over time, as the catalogue grows, whether the quality of the 360 Reality Audio experience differs hugely depending on the song and production.

360 by Deezer does what it says on the tin, and it appears to offer a simple and straightforward way of experiencing a new type of audio. It’s nice to use and easy to get your head around - the fact you can access all your favourite content from the one app should help make your streaming life simpler.

Of course, the success of an app like this and a format like 360 Reality Audio will come down to the content. Deezer relies on Sony to provide music for its catalogue and we’ve been assured it will increase its collection as quickly as Sony can make the content available.

Sony 360 Reality Audio: everything you need to know