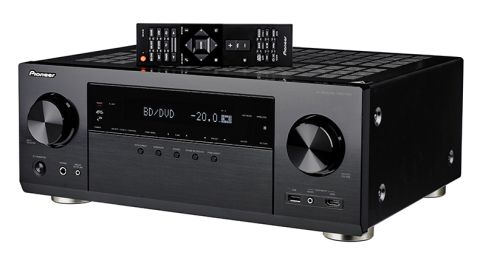 A big, meaty and enjoyable performance from Pioneer, with an excellent spread of features that’s sure to appeal at this price

Big. Powerful. Muscular. Words we traditionally associate with Yamaha and Onkyo’s affordable AV receivers. Not Pioneer’s, whose signature sound has always been more about precision and agility.

We start with the two-hour cinematic chase that is Mad Max: Fury Road, and the VSX-1131 roars into life. As the monstrous cars tear through the desert wasteland, the receiver rumbles and charges through the soundtrack with stacks of energy.

The changing gears, the grinding of metal on metal, the engines roaring and whining against the strain of the furious chase – there’s plenty of detail here to enjoy and the muscular character of the VSX-1131 works brilliantly with such an action-packed film.

It’s a brawny performance, with rich layers of low-end wallop. It goes pleasingly deep, with just a touch more precision needed to give the Pioneer class-leading drive. The bass isn’t flabby or plodding, although it can be a tad overly rich at times.

This isn’t necessarily a bad thing, as that richness is pleasing to hear, but it can take away some overall crispness and subtlety from the Pioneer. It’s a punchy sound, but not as articulate with the stop and start of notes as we’d like.

We’d recommend turning the Pure Direct sound mode on for a touch more solidity and organisation.

The scale of sound is impressively large. The amp delivers a great deal of height – and that’s even before we plug the Atmos channels in. It’s wonderfully open and spacious, allowing plenty of room for the top end – which never goes bright or sharp – to soar.

A more sedate film such as The Book Thief retains that sense of openness, with detail allowed to flourish in such a big and airy soundfield. We’d like a little more clarity and refinement from the Pioneer, though.

Voices can get a touch swallowed up in the middle of action sequences, and when it reaches scenes with plenty of dialogue, more nuance would let the characters get their emotion across.

That missing level of detail would add more finesse to the Pioneer’s sound, as well as make the surround effect more seamless across the speakers.

The £500 Denon AVR-X2300W, Pioneer’s newest rival, is that bit more articulate and immersive with its delivery.

The VSX-1131’s robust performance is enjoyable, but we wish it had more of the subtle and agile nature of Pioneer’s £1000+ receivers (such as the SC-LX59), which manage to balance power and punch with clarity and precision.

When it comes to music, we spend an afternoon watching the Talking Heads’ Stop Making Sense Blu-ray, and it’s an entertaining listen on its own. Having said that, the new Denon may not have the power and scale of the Pioneer, but it does have a more musical and engaging approach.

There’s the inevitable drop in subtlety and clarity when streaming songs from your smartphone over Bluetooth and Spotify Connect, but there’s still that sense of solidity running through the music. It’s worth playing around with the sound modes to switch between stereo and surround, too.

Surround makes everything sound bigger and grander, but stereo snaps rhythm into place in a more organised way.

You wouldn’t think much had changed in the Pioneer receiver from just looking at it.

The sturdy rectangular chassis (available in black and silver finishes), the large display that’s easy to read from a distance, the buttons and control dials that work seamlessly – it’s the high standard of build quality that we’ve come to expect from Pioneer.

But that doesn’t mean Pioneer hasn’t tinkered and tweaked with the formula. What it has focused on is user experience: there’s a new remote control and a revamped interface.

The remote control is smaller and less slender than the previous one – all the superfluous buttons (such as the number keys) have been dumped in favour of keeping the remote simple and easier to use. The main buttons for navigation and volume are large, distinctively shaped and laid out so that it’s intuitive to use within seconds – we have no problem finding the right buttons in the dark.

As an alternative, Pioneer’s iControlAV5 app is a colourful, interactive control app that puts others to shame. You can adjust every setting through the app, with the slick design and a fun interface (the Sound Explorer bubbles are our favourite) making it rather enjoyable to use.

We ended up using the remote for basic functions, but the free app is worth a download when you want to play about with the receiver’s sound settings.

Once you turn the receiver on and go to the home menu, you’ll find a smarter-looking interface with large icons and better graphics than before. It’s nice to use.

The interface revamp is tied to Pioneer’s MCACC auto calibration system, which has also gone through a significant update: it’s shorter. Much, much shorter. Regular readers might recall how we always joke that the Pioneer’s exhaustive calibration set-up takes so long – nearly 10 minutes – that you can go off and make a nice cup of tea (and get some biscuits while you’re at it).

The new MCACC calibration is over before the steam has settled on your cup of tea. We almost miss the harsh, repetitive test tones as it guides us through a 10-step process. (Almost.) The calibration is as accurate as ever.

The measurements for our reference PMC Twenty23 7.1 speaker package are pretty spot on throughout; we only have to dial down the subwoofer volume a few notches.

You would think Pioneer would have reserved some of the more headline-grabbing features for its pricier amplifiers, but this £550 receiver has all the latest technology and streaming features to make any home cinema enthusiast giddy with delight.

From Dolby Atmos and 4K HDR support to Google Cast and hi-res music streaming, the VSX-1131 has it all.

The VSX-1131 is a 7-channel amplifier with a claimed 160W per channel (at 6 ohms), with another set of speaker terminals available for height or Dolby Atmos channels.

The maximum Atmos speaker configuration goes up to 7.2.2 (with seven speakers, two subwoofers and two Atmos channels) – which should be a good start if you’re getting serious about an Atmos-equipped home cinema.

Those wanting to try out the DTS:X surround sound format can do so, too, after the firmware update later this year.

MORE: Everything you need to know about HDR

All the HDMI connections on the receiver support 4K/60p passthrough, with the first three HDMI inputs marked as being HDCP2.2 certified – that means those inputs are capable of playing the newly released 4K Blu-ray discs.

Along with the seven HDMI inputs (one of which is on the front), Pioneer also includes two digital optical inputs, and a coaxial input (something that its rival the Denon AVR-X2300W fails to include).

Two HDMI outputs, legacy analogue connections, a 6.3mm headphone socket, a 3.5mm input and a USB port for charging smartphones round off a fairly comprehensive list of connections for anyone’s sources.

MORE: A list of 4K Blu-ray discs on sale in the UK

You won’t be able to play songs off your smartphone through USB – that’s where Bluetooth and AirPlay come in – but the inclusion of dual band wi-fi (5 GHz and 2.4 GHz) means you can stream high resolution files up to 24-bit/192kHz in FLAC, AIFF and WAV files over your home network.

You can play DSD files wirelessly, too, instead of just plugging a stick full of files into the USB port. There are no interruptions over wi-fi during our test, and there’s always the ethernet connection if you want a more stable link.

There’s more: Google Cast is featured on Pioneer amplifiers for the first time, so you can ‘cast’ content from any compatible app (such as BBC iPlayer, Netflix, YouTube) straight through the amp and onto your screen.

And while there’s native support for Spotify Connect right out of the box, Tidal and Deezer subscribers can expect the same later in the year following a firmware update.

Pioneer’s VSX range of products hasn’t always enjoyed the unanimous success of the higher range SC-LX series. At this highly contested £500 price point, its AV receivers have had to battle rivals from Denon and Sony in the past couple of years.

And while last year’s VSX-930 gained that all-important fifth star for its excellent performance, the new VSX-1131 can’t quite match that balance between power and subtlety that we’re so fond of in Pioneer’s SC-LX receivers.

That doesn’t mean you shouldn’t consider the VSX-1131. Pioneer has chucked everything possible at the VSX-1131, and there’s no denying that excellent spread of features will catch everyone’s attention at this price.

That huge, open scale and muscular performance will appeal to many as well – it’s worth considering if you’re starting to build your home cinema system.