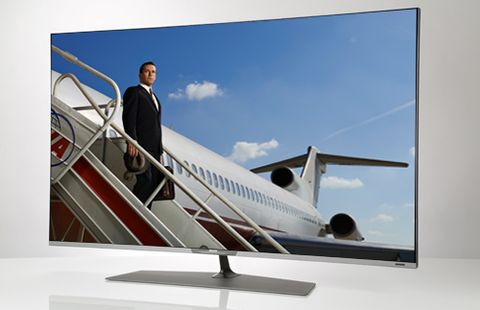 A low-cost big screen with limitations: not quite the flagship we’re looking for

A 55in 4K TV for £1500! It’s hard to believe when you consider last year’s prices, which saw similar models go for several times more.

Has Philips struck gold with its latest flagship? Sadly, no; despite the attractive price and a capable performance, we are left disappointed with its software and technical limitations.

By technical limitations, we mean the use of HDM1.4 and lack of H.265 decoding. Why does that matter? Because H.265 is the encoding used by Netflix – one of the only providers of 4K content at the moment.

As for HDMI1.4: it can transfer 4K content, but only at lower frame rates. That might not be an issue with films shot at 24fps, but it does rule out TV programmes, many of which are shot at 50-60fps.

Philips has made this decision with the belief that H.265 content is a long way away.

We’re not so sure – and we’d rather have a TV fully equipped for 4K when it properly arrives. Still, it seems Philips thinks price and picture quality is more important.

We always begin by calibrating a TV’s picture, starting with a THX optimiser disc, but here it’s a real chore.

We’ve mentioned Philips’ unintuitive interface before, but seeing as not much has changed here, we feel we should go into more detail.

The basic settings are buried in menus-within-menus. To adjust the picture’s brightness, you have to go into settings, set-up, TV settings, picture, advanced, and contrast – and only then do you get to brightness.

There’s the labelling confusion too, with multiple ‘contrast’ and ‘colour’ labels all meaning different things: ‘contrast’ refers to the backlight, while ‘video contrast’ means the actual picture contrast.

It doesn’t help that operation is clumsy. More often than not, there’s a lag to using a button to scroll right.

Overall, the user interface is so frustrating, that the smallest of tweaks is makes us sigh. It’s a shame, because once it’s all sorted, the picture is pretty good.

It’s not a class-leading performance like the Samsung UE65HU7500, but what you get is more than good enough for the money.

We load a mixture of film clips and stock footage, and the image is sharp. There’s plenty of detail in strands of grass, even if it’s not the most insightful picture we’ve seen. Colours are fairly balanced, once they’ve been tweaked.

Motion is smooth, with slow pans of green fields free of judder. Whites are crisp and punchy. Blacks are fine but not quite properly dark, and some detail is lost in shadows.

Contrast is a weak point here: the Philips doesn’t juggle bright and dark colours well, and the result is a picture lacking any dynamic.

We move down to 1080p with a Blu-ray of the new RoboCop, and we’re impressed with the picture. Full HD upscaling on 4K sets used to be patchy, but here is a performance we are happy to watch on a regular Full HD TV.

It’s crisp and detailed with little in the way of picture noise. Whites are bright, while contrast once again could be stronger when showing bright and dark images.

Turning on Freeview HD to watch Wimbledon tennis, we find the colours balanced. Motion is occasionally unstable but we put that down to the feed, as Blu-rays are free of hiccups.

3D is par for the course. It’s a passive set: the four pairs of glasses provided are fairly undemanding on the eyes, but the sense of depth is slightly unnatural, with the foreground often looking like a 2D cutout.

Moving further down to standard definition, there’s the inevitable loss of detail and clarity. As expected the image is blurrier, with more noise and less subtle processing.

The SD upscaling isn’t as capable as the Samsung UE65HU7500, but it’s still perfectly competent. Motion is fine for the most part and there’s still a good amount of detail, especially when considering the TV has to make up about 95 per cent of the image.

The sound deserves praise. The back of the TV features the 25W-driver ‘Ambi wOOx’, which provides greater bass and a fuller midrange than we expect from flat-screen TVs.

With good weight and a good sense of scale, this is a TV we are happy to listen to, without the aid of a soundbar.

Also at the back is Ambilight, a feature on some Philips TVs that we’re rather fond of. Rows of LEDs are built at the left and right edges of the TV, and project coloured light on the wall, based on images on the screen.

It’s a little odd at first but, once you get used to it, it helps to create a more immersive experience thanks to the illusion that the picture is bigger than it actually is. You can adjust brightness, and how much it moves.

There’s also an option to put in the colour of your walls, so the TV can adjust and give out more accurate colours. It’s a great feature.

Elsewhere, the Philips impresses with its slim profile and thin borders. If you want to save space with an inconspicuous telly, this is a good option.

Connections are fairly generous: four HDMIs, three USBs and one each of SCART, component, digital optical out and 3.5mm out.

You get a Freeview HD tuner, as well as a satellite socket, but this set isn’t Freesat certified.

There’s a single remote control, and unlike some sets this isn’t a flashy pointer. It’s an old-fashioned slab with a lot of buttons.

Turn it over and you’ll find even more buttons, but in the form of a full QWERTY keyboard, which is good for entering passwords when connecting to wi-fi.

Don’t like remote controls? You can also download Philips’s MyRemote app (free on Android and iOS). This gives you a basic remote, and also lets you send content from your phone or tablet to the TV.

You can also mirror the TV’s picture in the app, so now you can watch Countdown in the bath. Lovely.

The Philips 55PUS7809 is a mixed bag. For the money, we’re happy with the screen size and the picture performance.

But we can’t get past the restricted approach to 4K, which shows a lack of commitment and undermines the point of getting 4K in the first place. Oh, and that user interface really grates.