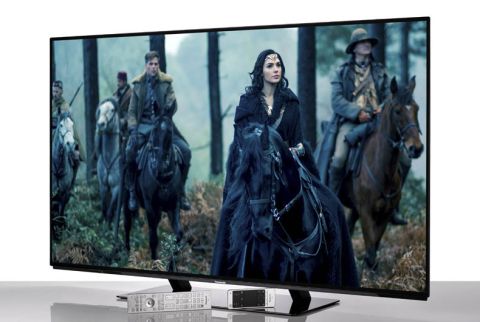 Panasonic’s most affordable OLED is still a pro-oriented screen, but is let down by a lacklustre HDR performance

Everything about the EZ952 is serious, from the straight-laced design to the vast menus, which contain more picture-tweaking options than there are wines at Claridges.

This is the most affordable member of Panasonic’s new OLED family, and is clearly intended for the more dedicated enthusiast, or as Panasonic says in its own literature, ‘pro’.

That doesn’t necessarily make it a bad choice for the more casual buyer, as long as you don’t mind a complicated first-time calibration.

But there is one area in which the EZ952 is a long way behind its rivals: HDR.

The Panasonic supports HDR in both the HDR10 and HLG formats, so we gravitate towards that first. At the time of testing, the Amazon Instant Video app wasn’t available, but it will be by the time the TV goes on sale in July. Thankfully, Netflix is onboard to display all of its high dynamic range glory.

Or at least, it should be. Despite being an Ultra HD Premium certified set, the EZ952 appears to lack the contrast and brightness necessary to deliver the kind of punch we’ve come to expect from HDR content. Play Daredevil on this set and it’s significantly flatter, less dramatic and less exciting than on the LG OLED55B7V.

Sunlight and reflections aren’t as bright, and flames stand out only dimly in a darkened room. Characters tend to blend into the background more than they should, too. It’s not much of an improvement on SDR, and that’s not good enough from a TV costing £3000.

It isn’t simply an example of OLEDs brightness limitations in comparison to LCDs with LED backlights, because LG and Sony have both produced far more dynamic OLED sets this year.

The EZ952’s edges are a touch softer than those of the LG B7, too, and combined with the relative lack of punch, the result is landscapes and scenery shots that are less three-dimensional and realistic.

It’s a shame, because there’s a lot that this TV gets right. Colours may not be as punchy as they are elsewhere, but they’re natural and realistic.

Skin tones are well judged, with natural colour and genuine subtlety. There’s a good amount of detail in the 4K picture, too, provided the scene is fairly well lit – the EZ952 doesn’t have the insight into darkness of its rivals.

The motion processing is set too high out of the box, lending everything an uncanny, over-defined movement and introducing artefacts to fast action. Turn it down and you get a useful bit of sharpening without the soap opera effect. It’s not as spot-on as the Sony KD-55A1 in this regard, but isn’t far off.

Interestingly, when you feed the same 1080p Blu-ray to the Panasonic EZ952 and LG B7 you get a very similar performance from the two sets, proving that HDR is the Panasonic’s weakness.

The LG delivers just a touch of extra vibrancy to skin tones and a bit more white detail, but it’s generally remarkable how close these two sets are with 1080p content.

Both the Panasonic and the LG are quite a long way behind the dynamism and three-dimensionality of the Sony KD-55A1, but Blu-ray images are sharp, detailed and supremely natural.

You feel as though you’re getting the image as intended, with no exaggeration or embellishment. There’s a great deal to be said for that.

With standard-def content, the picture is surprisingly clean, controlled and stable, boasting balanced, natural colours. Here the Panasonic is an improvement on the Sony A1, but it’s still short of the quite astonishing standard-def delivery of the LG B7.

Hardcore gamers out there should be impressed by the Panasonic’s input lag of just 25.7ms. True, the Samsung Q7F and LG B7 are faster, but any score under about 40ms should be fast enough that you register no lag at all in action.

Games also look great on the EZ952, with crisp edges and plenty of detail, but if you’re playing an HDR game such as Horizon Zero Dawn, you once again won’t get the extra punch you’re expecting.

Getting the Panasonic EZ952 to look its best is a rather arduous task, thanks to an abundance of technical options that often aren’t particularly well explained.

Some options are considered to be incompatible with others - Colour Gamut and Colour Remaster, for example - but the TV does at least let you know that when you hover over such a setting.

We also found, via the THX Optimizer disc and a whole load of real-world testing, that adding a few extra points of Sharpness, Colour and Brightness helped unlock some more of the Panasonic’s potential, and we dropped Contrast down a little to balance out that extra Brightness.

There’s also a whole Advanced Settings menu that’s unavailable when you’re using the Normal mode. You can get access to this by choosing one of the other modes, such as Custom, but we’d suggest leaving these options alone unless you’re an experienced TV calibrator.

For what it’s worth, there’s nothing in there that gives the Panasonic extra HDR vibrancy.

The EZ952, as with Panasonic’s smart TV range as a whole, is underpinned by Firefox OS.

It’s not as flashy or well-integrated as the LG and Samsung operating systems are, feeling rather like a piece of software bolted on top of Panasonic’s own, dull menu system, but it is very clear and simple to use.

It also offers almost every on-demand service you could need – or will do when Amazon is added.

For navigation you get two remotes: a smartly dressed but ultimately old-school clicker, and a smaller, more ergonomically shaped zapper with a touchpad.

That touchpad can be a little bit inaccurate, skipping left through menus when you mean to scroll down, and for that reason you’ll probably find yourself using the bigger remote most of the time.

It’s just that bit more reliable and has useful features such as a dedicated button for Netflix.

MORE: Panasonic 2017 TVs - everything you need to know

When it comes to the look of the TV itself, the Panasonic is decidedly no-nonsense. The super-slim panel section is pretty much identical to that of the LG B7, rounded edges and all.

Stuck to the back of that panel is the plastic enclosure that contains the TV’s processing components, connections and speakers. This section is much larger than that of the LG, which makes the super-thin portion of the chassis look just a little less striking.

The stand is more basic and less elegant than the LG, too. Essentially what amounts to a bracket is attached to the VESA mounting points on the back of the set, to which you attach the two-legged, flat pedestal.

The overall look is more professional and serious than stylish or sexy, but for some that could be preferable.

MORE: What is OLED? The tech, the benefits

It should come as no surprise that we’d recommend buying a separate sound system to partner the EZ952, but sticking with the built-in speakers gives you a performance that’s a little more direct than that of the LG B7, but also a bit sibilant and harsh in the treble.

The surround modes (Virtual Surround+ and Virtual Surround) are decent, they add some greater width and spaciousness to the presentation while boosting the bass and treble, but it also sounds rather artificial.

It’s worth experimenting with the modes when watching a film or more epic show, but for everyday TV watching you’re best off with Standard.

The Panasonic TX-55EZ952B is a straight-laced and serious TV aimed at the serious enthusiast rather than the average consumer.

As such, it’s tricky to get the most out of it, but with a bit of perseverance you’ll get the picture set up in a way that you like and you should only have to do it once.

But the EZ952B has two major issues. The first it shares with the LG B7 – the Sony A1 is just a clear step above in terms of detail, definition and dynamism. The second is that its HDR performance is pretty weak, delivering images that lack the expected contrast and punch.

If you only ever watched SDR content you’d find it hard to choose between this TV and the LG, but HDR is very much the future of television, and in this regard the Panasonic is a fair way behind.