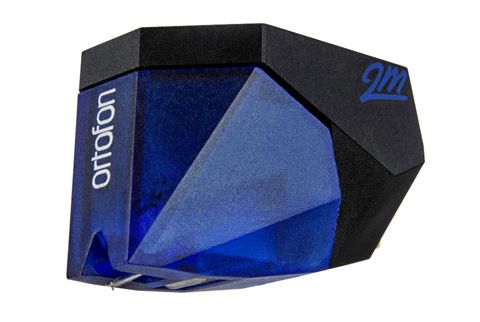 Not the most revealing cartridge at this level, but it’s a faithful messenger with decent timing

2M is Danish cartridge specialist Ortofon’s entry-level hi-fi range - the company’s bread-and-butter needles, if you like.

The 2M Red, at just under half this price, is a very popular choice for a first upgrade to budget turntables - and it’s a good option.

The 2M Blue is a bit more serious. It inhabits the same angular body and has a removable, replaceable stylus.

The tip is of the nude elliptical type, which means that it’s a whole diamond bonded to the end of the cantilever rather than a diamond tip on a metal mounting, as is usually the case with budget needles.

Output is a higher-than-average 5.5mV and downforce a typical 1.8g, all of which makes the 2M Blue a pretty universal cartridge in terms of both turntables and phono stages.

Build quality is high despite the largely plastic construction. It’s a precision moulding with a large surface area given to the removable stylus section, which should minimise any movement that can undermine this variety of cartridge.

The majority of the 2M Blue’s body might be plastic, but it has a mounting plate with captive nuts to provide an anchor for mounting hardware.

This means you can screw the fixing bolts straight into the top and not have to deal with tiny nuts to thread on.

Aligning this Ortofon is not made any easier by the faceted sides of its body, but the mounting has parallel sides which can be matched to the headshell fairly easily.

From there it’s a matter of getting the tip in the right place, which can be done without too much squinting thanks to an opening above the stylus that also assists cueing.

The sound could, however, have a bit more in the way of definition - a comparison with a digital version of the same piece reveals that, while timing is better with the cartridge, the bass isn’t as solid. The Ortofon nevertheless delivers a real sense of vitality.

Captain Beefheart’s Best Batch Yet is intense and dense, yet coherent in its grip. We spin this track because it’s difficult to get the timing right, but that particular challenge is no barrier to the 2M Blue, which lets the track chug in entertaining fashion.

Elgar’s Cello Concerto reveals the Ortofon has plenty of power, if not quite as much potential for revealing image depth as the Goldring 1042 or Audio Technica AT-F7 MC. Background noise levels aren’t as quiet as they could be.

It means that clicks and pops can be a little more obvious.

The 2M Blue is a capable and reasonably even-handed cartridge. It’s not going to set the world on fire, but that’s not necessarily what you want with an affordable turntable.

It’s a steady hand that gets on with the tracking so that you can enjoy the music.

See all our Ortofon reviews