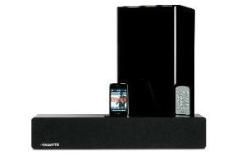 A neat system but sonically, it doesn’t knit together especially well

The soundbars we review are usually designed to deliver surround sound. Not the T12. There are no HDMI inputs, surround sound processors or video upscalers here.

The sensibly sized speaker (slightly wider than a DVD player) contains eight drive units and comes with a subwoofer. The bar features an integrated iPod dock and analogue inputs – useful if you want to replace your TV's speakers.

An auxiliary input means you can connect an additional source. There's also a remote control that gives full control over iPod menus.

Spatial stereo, but no surround
Instead of attempting to create surround sound, the T12 uses airSOUND technology to create a more spatial stereo sound. There's a switch on the back of the bar that offers three settings: off, normal and wide.

With airSOUND turned off, music sounds muffled. Switch it to wide and, while the volume of the side speakers is increased, the sound is messy with vocals and instruments tripping over each other. The T12 performs best when set to normal.

Bass is detached and ill-defined
There's no real harshness or brightness in the treble. It's only when you switch to tunes with a decent amount of bass that the T12 is sent into a tizz. The bassline of Gwen Stefani's What you Waiting For kicks in, and makes the sub sound detached.

Consequently the system fails to deliver a coherent, rhythmic rendition of the song.

To its credit, the bar does a perfectly decent job when used as an alternative to tinny-sounding flatscreen speakers, but that subwoofer is a sticking point and one that prevents the T12 from really blossoming.