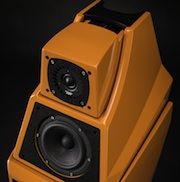 Remember the mighty Wilson Audio Alexandria XLF speakers we covered here back in May? They were huge, hugely expensive at £200,000 a pair, and claimed to be 'arguably the best loudspeakers in the world'.

Well now Wilson Audio has launched a new model containing much of the technology of the Alexandria XLF in what it calls a 'more manageable size': the Alexia is coming to the UK next month at £48,000 a pair through distributor Absolute Sounds.

The Alexia, which still stands a little over 135cm tall and weighs 116kg per speaker, uses 24.5cm and 20.3cm bass units, both newly-designed for this model, a 17.8cm midrange driver carried over from the Alexandria XLF and a specially-developed version of Wilson Audio's Convergent Synergy 25mm tweeter. Sensitivity is 90dB/W/m, and the speakers can be used with amps from 20W upwards.

The treble and midrange drivers are housed in their own modules, which can be adjusted for optimal dispersion, and the enclosures are formed from proprietary composites, which the company calls X-material and S-material.

The speakers are hand-built at Wilson Audio's factory in Utah, and finished in its automotive-class paintshop to each customer's requirements.