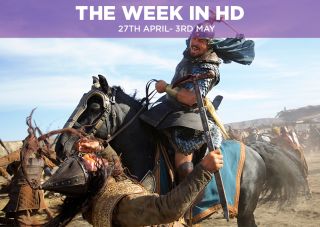 This week there are new and classic Blu-ray releases, from Ridley Scott to Mad Max, while a couple of modern small-screen classics approach their denouement...

It's been 21 years since the death of Kurt Cobain and documentary Montage of Heck etches a portrait of his life up until that fateful moment in 1994.

It's an intense documentary with interviews from Cobain's parents, family and friends casting a light on a life that ended too soon.

Buy Cobain: Montage of Heck on Blu-ray at Amazon

It's full of stunning visuals, but there are times where the film's tone is just a little too over-bearingly gloomy.

Nevertheless, it has its moments, thanks in no smal part to Scott's eye for epic sequences, including several battles and the Ten Plagues scene.

Buy Exodus: Gods and Kings on Blu-ray at Amazon

The Duke of Burgundy

Director Peter Strickland follows up his Berberian Sound Studio with the The Duke of Burgundy, an exploration of a fesity female relationship.

When Cynthia (Sidse Babett Knudsen) tests the boundaries of her partner Evelyn (Chiara D'Anna) it causes friction between the two, and further revelations suggest they may not be as invested in their relationship as they first thought.

Both atmospheric and sensual, for those who seek a challenge from the cinema they watch, The Duke of Burgundy fulfils that expectation.

Buy The Duke of Burgundy on Blu-ray at Amazon

Mad Max: Fury Road is almost upon us which means another edition of the original Mad Max is now out on Blu-ray. It sees Mel Gibson's Max Rockatansky seeking revenge on a motorcycle gang for the murder of his wife in the wasteland of post-apocalyptic Australia.

Innovative back in 1979 the action still retains its rawness even today. The action - before CGI - features some of the most adventurous - not to mention painful-looking - stunts that we've seen.

High Sparrow. In this episode Arya meets the Many-Faced God while Tyrion and Varys walk the Long Bridge of Volantis. Expect a lot of walking (and violence, naturally).

Who is Harrison Wells? More hijinks in this week's Flash as he has to find a way to contain a metahuman that can shapeshift into other people.

A stranger-than-normal case at the Major Trauma Centre when a person bitten by a dog enters the ward… with the dog still attached.

Kurt Russell stars in this update of the seventies original that sees a massive tidal wave capsize a crew liner. The CGI and special effects are excellent even if the story and a few of the characters leave a little to be desired.

The league title is in sight for Chelsea but Leicester City have shot up the table after four wins in a row and could pose a threat.

This is a vital match for teams at the top and bottom of the league.

Al Sah-him. Oliver undergoes a transformation (into what we're not sure), while in Starling City Laurel asks for Felicity and Diggle's help against the League of Assassins.

Time & Life. We're almost at the end of Mad Men's run with only three episodes to go. Time & Life sees Jared Harris (who played Lane Pryce) direct an episode that sees Roger needing Joan's help fo fix an error, Don coming up with another of his big ideas and Peggy struggling to cast a commercial.

Séance Time. It's episode six and the second series of Inside No. 9 is over too soon.

We delve into the spiritual world in tonight's episode. It's Tina's first trip to Madam Talbot's séance, and she's not expecting much. But there's something waiting for her on the Other Side, and Talbot's seemingly helpful assistant Hives knows an awful lot about it.

Louie bumps into an old cop buddy (Lenny, played by Michael Rappaport) who's overbearing and obnoxious... which doesn't go down too well with Louie.

Afterlife. Coulson makes a move to secure the future of S.H.I.E.L.D while Skye meets another Inhuman called Lincoln.

Panic Room is a tense, suspenseful effort that sees a divorced woman (Jodie Foster) and her daughter (Kristen Stewart), take refuge in the panic room of their new house when three men break in (including Forest Whittaker and the new Joker, Jared Leto).

Like a lot of David Fincher films it's dark and effective.

A win at Old Trafford would surely secure a Champions League berth for Louis Van Gaal's men, but after a sequence of six wins in a row, two damaging defeats against Chelsea and Everton have seen progress stall.

West Brom will need at least a point as they bid to keep clear of the relegation zone.

Dredd is a film that barely anyone went to see when it came out in the cinemas and it deserved better than that. Not too dissimilar to The Raid, Karl Urban's Judge Dredd is tasked with ridding a 200-storey building of apartments free from a new drug on the market called 'slo-mo'.

Before he can do that he has to take down slum lord Ma-Ma (Lena Headey) who will go to any lengths to protect her supply of drugs.

The Spanish Grand Prix. We're three races in as we head to the Circuito de Jerez, and Yamaha's Valentino Rossi is comfortably in the lead ahead of - surprise! - two Ducatis.

After last week's wobble and finger surgery, defending champion Marc Marquez will be desperate to take back his spot on the podium, but Rossi - a six time MotoGP champion who is easily the oldest man in the pack at 36 years - looks unstoppable. Are we seeing The Doctor on his way to his 7th world title?

At the Etihad the fixture between these two teams ended with a thumping 4-1 win to City in a match notable for the award of four penalties.

Both teams have faltered at the most crucial stage of the season, but this match could plant a marker for both teams' ambitions going into the 2015/16 season.