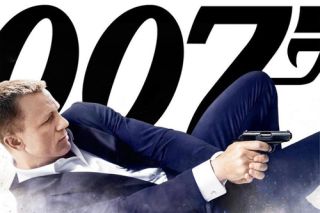 Welcome to The Week in HD, our guide to all the must-see TV shows, films, sports and Blu-ray releases to grace your screen over the next seven days. The big news this week is Skyfall: you can finally own the latest James Bond film on Blu-ray!

And in other news, don't forget that we have our annual Bristol Show happening this week - from Friday 22nd to Sunday 24th of February - check out our dedicated show blog for all the details and information about what brands will be on display. We hope to see you there!

Here's our pick of the week…

Bond is back, and Skyfall is being hailed as one of the best Bond films ever by fans and critics. 007's twenty-third outing sees a grizzled Daniel Craig locking horns with Javier Bardem's villain Silva, with Judi Dench turning in a cool-as-ever performance as M, while Ben Whishaw joins the cast as this generation's Q. It's already a recipient of the Outstanding British Film Award at the recent BAFTA ceremony, but what really matters is what we though of it when we got our hands on the Blu-ray - read our review here.

White Bear. Charlie Brooker continues his dystopian series with Victoria (Being Human's Lenora Crichlow), who awakes one day to find all her memories erased and that the rest of humanity have become zombie-like cameraphone-wielding voyeurs. With the help of unaffected survivor Jen (Tuppence Middleton), they attempt to find the source of the technology responsible for this nightmare.

It's the final episode and the gang are running out of time to stop humanity's demise. Can they find and stop the mysterious head villain The Rabbit and save mankind? And has Utopia done enough to return for a second series?

"Take car. Go to Mum's. Kill Phil - sorry - grab Liz, go to the Winchester, have a nice cold pint, and wait for all this to blow over. How's that for a slice of fried gold?" Need we say more?

Pie and Prejudice. Hal introduces Alex to a 200-year-old female ghost and Tom meets another werewolf at work. But ghost Mary is convinced that she was Hal's last victim, while Larry (played by The Mighty Boosh's Julian Barratt) doesn't have Tom's best interests at heart.

London, 1864, and blood and a body are found on a Hackney-bound train. And so begins the story of the first railway murder in Britain - providing mystery and crime novel writers with a fantastic murder plot. This BBC2 documentary uses first hand testimony from the people involved at the time - court transcripts, memoirs, letters and vivid journalism - to paint a picture of how this event became a news sensation and gripped the Victorian public. We go on a journey from the engine driver who discovered the body to the detective who was charge of the case, all to answer one question: who killed Mr Briggs?

Headline stories from the entertainment, political and general news worlds get scrutinized and picked apart by Charlie Brooker's scathingly satirical style, with contributions from regulars Al Campbell and Diane Morgan.

Headhunters. Firefly fans, rejoice! Nathan Fillion is reunited with his Firefly co-star Adam "Jayne Cobb" Baldwin, as Castle teams up with Ethan Slaughter of the NYPD's gang unit. But Castle's initial excitement at being partnered with the rule-breaking, tough guy attitude of Jayne… er, Ethan… wanes after witnessing his brutal and often violent methods of detective work.

Jobs. A repeat, but worth a rewatch for Rev Richard Coles's entertaining debut on the show, joining Sarah Millican, David Mitchell, Alan Davies and Stephen Fry to talk about jobs.

A comic war film, based on Jon Ronson's novel, in which a reporter in Iraq just might have the story of a lifetime when he meets a former special forces agent who informs him about a secret branch of the US military that trained psychic spies to employ psychic powers as weapons against American enemies. With a star-studded cast including George Clooney, Kevin Spacey, Ewan McGregor, Jeff Bridges and Robert Patrick.

Clarkson and Hammond attempt to design a car specifically for elderly people, and then take a trio of pensioners out for a spin in their creation. Meanwhile, James May test-drives the new Range Rover in both London and in Nevada, where he takes on an autonomous military machine. James "Charles Xavier/Macbeth" McAvoy is the star in a Reasonably Priced Car.