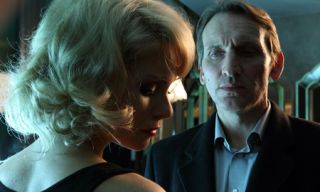 Hello everyone, and welcome to The Week in HD, our guide to the best high-definition TV shows, films, sports and Blu-ray releases to grace your screens this following week.

Here's our pick of what to watch out for this week:

The three-part series comes to an end tonight, and I've only just caught up with it. Christopher Eccleston is darkly compelling as local councillor Daniel Demoys, who is a recovering alcoholic suffering from bouts of blackouts – during one of which he accidentally killed a local businessman.

But a chance heroic act sees him elected as the mayor – but can he keep his dark secrets hidden for long? Slickly filmed with a compelling script, also starring Andrew Scott as Detective Bevan – it's well worth a watch.

Just in time for the looming 2012 London Olympics, it's only practical to have Chariots of Fire re-realeased in Blu-ray form. The story of two young athletes who ran for Great Britain in the 1924 Paris Olympics, it might just be overshadowed by that instantly recognisable score that won a well-desrved Oscar.

Victory of the Daleks. Only in Doctor Who, would a Dalek asking 'Would you like some tea?' be the highlight of an episode, even with no other than Winston Churchill calling the Doctor in for some help with World War II.

Penned by Mark 'League of Gentlemen/Mycroft Holmes' Gatiss, the new incarnations of the Daleks may not have won the fans over with their Power Rangers colours, but they've certainly gained a new catchphrase.

Matt Damon returns in this sequel about the amnesiac assassin, who's forced out of his newly quiet life when he's framed for murder, and sets out to hunting down the people responsible. Also stars Julia Stiles.

Beautiful and heartbreaking adaptation of Kazuo Ishiguro's dystopian sci-fi novel about three friends who grew up in an isolated orphanage/school.

As they grow up and enter the real world, they tangle with relationships and learn the truth behing their upbringing and purpose in life. Starring Carrie Mulligan, Andrew Garfield and Keira Knightley.

Aaron Sorkin's sharp drama about a news programme continues, with Emily Mortimer as the new producer making her mark on the newly revamped News Night (no relation to Paxman), and tensions run high as a secret gets out.

Documentary following the gold medallist sprint cyclist as she prepares for the 2012 London Olympics.

The Shakespeare Uncovered series comes to an end saving the best for last, with David Tennant exploring the Bard's most celebrated play and most coveted role – Hamlet. He meets other actors who have played the tragic Prince of Denmark, and discusses the features that make it Shakespeare's most famous and enduring play.

Darren Aronofsky's dark tale about a ballerina who starts to unravel as she pursues her dream role in Swan Lake – but the pressure gets to her. Chilling psychological drama, starring Natalie Portman, Mila Kunis, Vincent Cassell and Winona Ryder.

At its core, this film is about a legal settlement over a social media site, but it's far more riveting than it should be, thanks to both the talents of Aaron Sorkin and David Fincher – it's a cleverly written script and the pacing is exciting. Jesse Eisenberg and Andrew Garfield give excellent performances as the founders of Facebook.

Warm up game before the Olympics.

Cooked up from the minds of half of the League of Gentlemen, here's a chance to rewatch the first series of the comedy thriller.

Five seemingly unconnected characters – a blind recluse, a telekinetic dwarf, an embittered clown, and a man-child with his overbearing mother with overtones of Norman Bates – all receive the message: "I know what you did."

The past catches up with them as their stories intertwine eventually in this darkly comic and joyfully bizarre series from Reece Shearsmith and Steve Pemberton.

Live qualifying coverage from the Hockenheim circuit. Highlights on BBC1 HD at 5pm.

Terry Benedict wants his money back, with interest. As he tracks down all the members of Danny Ocean's gang, they reunite to steal more stuff, while also fending off master thief The Night Fox, who keeps outdoing them. The all-star ensemble cast returns with some special guests.

The Borgia Bull. The Renaissance crime family returns for a second season, with the newly Pope'd Rodrigo (Jeremy Irons) clamouring for popularity by throwing a pagan feast, while also seeking revenge on those who plotted against him, mainly Cardinal Della Rovore, who seems to have nine lives and immunity against all assassination attempts.

Daniel Craig's first outing as 007, and my favourite Bond film ever. Mads Mikkelsen makes a memorable Bond villain as Le Chriffre, Eva Green is stunning as Vesper Lynd, and Judi Dench is always awesome as M.

Tom Hiddleston's Henry is now fully king, and to seal his destiny he now has to fight the French. Last in the series, also starring John Hurt, Richard Griffiths and Julie Walters.

Live coverage of the race from the Hockenheim circuit. Highlights on BBC HD at 5.30pm.

Shrek yearns for the days before he became all cuddly and responsible for a family and kingdom, when he had a simple life as a feared ogre of the forest.

Enter Rumpelstiltskin – not the most trustworthy of fairy tale creatures – who grants Shrek his wish. But there's a catch - the wish creates an alternate reality where Rumpelstiltskin is the tyrannical ruler of the kingdom, while Shrek is friendless.