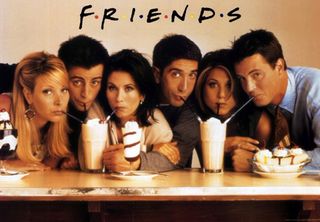 Welcome to The Week in HD - our guide to all the best high-definition TV shows, films, sports and Blu-rays to grace your screen each week.

You can now finally watch all ten series of one of the best sitcoms ever in glorious high definition. Join Monica, Chandler, Rachel, Ross, Phoebe and Joey at Central Perk and dive straight into their loves, lives and laughs - it's a show that you'll never tire of watching on repeat.

Coverage of the final of the ATP tournament, with Roger Federer playing Novak Djokovic.

A fascinating document charting the life of Lang Lang, one of the world's most prolific classical music superstar, charting his rise from child prodigy to global phenomenon.

Five chefs each have ten minutes to break down a cooked lobster and serve it with salad in a skills test with Monica and Gregg looming over them, and those who survive will have their pastry-making skills put to the test with a classic Beignets à la Crème.

Mr Bean wins a holiday to Cannes and a camcorder. Chaos ensues as he struggles with the the unknown (language, cuisine, everything else), then manages to separate a young boy from his family and must find increasingly hilarious ways to return him.

The intense ten-minute skills test tonight involves preparing a crown of duck for roasting and the legs ready for confit. The remaining four contestants then have the challenge of preparing monkfish liver in three different ways.

The second series of this original drama about a BBC news team during the 1950s is back. It's November 1957, and with Freddie fired, Bel is struggling to keep their news programme functioning, especially as tensions arise as the new Head of News arrives. Starring Romola Garai, Dominic West, Ben Whishaw, Anna Chancellor and Julian Rhind-Tutt.

The young aspiring businesspeople are challenged by Lord Sugar to find ten props for the English National Opera, testing their negotiating skills.

Famous Last Words. One of my favourite Castle episodes, where Castle and Beckett must solve the murder of a rising young rock star. But do the lyrics to the last song she performed right before she died hold all the clues to identify her killer?

Filmed at the Nokia Theatre in Grand Prairie, Texas in November 2007, the legendary blues rock band performs their hits including La Grange, Pinchushion, and Gimme All Your Lovin'.

Qualifying. Live coverage from the new Circuit of the Americas, in Austin, Texas. The US GP last happened in 2007 in Indianapolis.

Race. Live coverage from the Sky F1 team of the newly revived American Grand Prix from Texas. When the US GP last took place in Indianapolis in 2007, Lewis Hamilton won from pole... can he repeat his success amidst the charging Red Bull of Sebastian Vettel and Fernando Alonso's Ferrari?

If you missed it the first time round, here's a chance to see this homage to all the Bond cars that we love, and some we don't quite love as much. Featuring interviews with Daniel Craig, Roger Moore, Guy Hamilton and old Stig Ben Collins, Richard Hammond explores the cars stunts and has a go at TG's own submarine car.

The first of the video-game-turned-movie-franchise was, and still is, the best of them all. When a virus outbreak hits a genetic research facility owned by the mysterious Umbrella Corporation, a team of commandos goes in to discover the survivors have become infectious zombies. An amnesiac named Alice might be their only hope of survival. Starring Milla Jovovich, James Purefoy, Eric Mabius and Michelle Rodriguez.