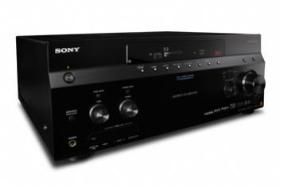 As well as the 3D pass-through, the new models have extensive connectivity for custom installation, through conventional infrared input jacks and two-way serial control, plus control over IP. This allows remote set-up and troubleshooting over an Ethernet connection, and simple firmware updates.

Ethernet hub
Four Ethernet ports are provided, allowing the receivers to act as a hub for other devices, and two of the the receivers – the STR-DA5600ES and the $1500 STR-DA4600ES – can even output audio and video to a second zone over CAT5 cable, as well as offering 1080p upscaling to the main zone, and 1080i to the second.

In addition, all the receivers can be controlled using a free iPhone/iPod Touch app, which will also 'drive' connected source components.

All three receivers also have Sony's Digital Cinema Auto Calibration set-up system, with Automatic Phase Matching and HD Digital Cinema Sound processing, the range-topping STR-DA5600ES offering DCAC EX, not only adjusting for the usual speaker size and distance, but also the angle to the listening position.

The STR-DA5600ES delivers 7x130W, has six HDMI 1.4 inputs and two outputs (which can be switched, or used simultaneously), and will be available in US stores in September.

Standby pass-through
All models support all current HD audio formats as well as eight-channel Linear PCM, and have audio return channel capability on their HDMI connections. They also give standby pass-through of all connected HDMI devices, so you can watch sources on the TV without having to power up the receiver.

3D Blu-ray
Finally, the new 3D ES Blu-ray player is the $400 BDP-S1700ES, with built-in Wi-Fi for access to BD-Live, Sony Bravia Internet Video and the company's new premium video service in the States, Qriocity. It also has SACD playback and the option of being used with Sony's free BD Remote app, which will soon be available for Android devices as well as in its current iPhone/iPod Touch form.

There's no information as yet about UK availability or pricing on these models – we'll update you as soon as we hear any more.