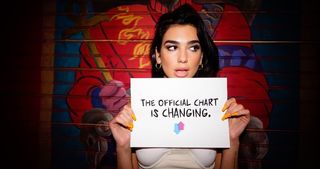 It's decades since music videos supposedly began killing the radio star, and now they've become part and parcel of music streaming services such as Apple Music, Spotify, Tidal and the newly launched YouTube Music in the last year, they are arguably more important to the industry than ever.

To reflect that, video streams and downloads will start counting towards the UK’s weekly Official Singles Chart (unveiled by BBC Radio 1 every Friday from 4pm to 5.45pm) from Friday July 6th 2018, four years after streams from music streaming services were first included. As well as audio and video free and paid-for streaming, the chart also reflects sales of downloads, CD and vinyl.

The new inclusion will alter the weighting of streams. While currently one sale is the equivalent of 150 free or paid-for streams, from the 6th July a sale will equate to either 600 free or 100 paid-for audio and video streams.

Dua Lipa, whose video for New Rules tallied the most video streams (60m) by a female artist in 2017, explains all below…