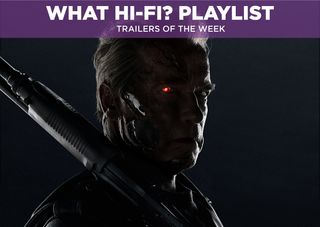 Tim Story's take on the Fantastic Four a decade ago was… not fantastic. Eight years after The Rise of the Silver Surfer, Marvel's first family are back and this sombre trailer shows they'll be dumping the hijinks of the first two for a tone that's more serious and intense.

It looks promising and with Chronicle's Josh Trank directing we're sure there will be some interesting visuals. Fans with good hearing may notice that the trailer music belongs to the TV show Broadchurch.

Another week, another glimpse of Marvel's Age of Ultron. This one focuses a little more on Mark Ruffalo's Bruce Banner/Hulk. Could he be seeing more action in this sequel?

And is that Scarlett Witch controlling him or has he lost control of Hulk, requiring the fail-safe plan of Stark's Hulkbuster unit?

Terminator Genisys hasn't enjoyed much good press and, watching this Super Bowl trailer, we're still not sure what's going on... or why we really needed to go back to a young Sarah Connor.

It looks utterly ridiculous, but it has a good cast (Daenerys!) in its favour. The title still annoys us.

Buy The Terminator on Blu-ray at Amazon

Ted's back and, based on this trailer, we can expect more profane and lewd behaviour from Seth McFarlane and Mark Wahlberg.

Buy the Ted Blu-ray at Amazon

Tom Hardy and Gary Oldman put on their best Russian accents and search for a killer in Child 44, while if you've ever wanted to see how Jeff 'The Dude' Bridges goes to sleep, now you can.

The first trailer for Spooks: The Greater Good with Game of Thrones star Kit Harrington is now up and, after watching the Fantastic 4 trailer, watch it again in this trailer mash-up with Interstellar.