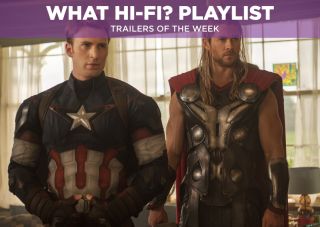 Released a little earlier than expected, this week brought us our first look at what will probably be one of the biggest hits of 2015 in the form of Marvel's Avengers: Age of Ultron. Elsewhere we got a possible award-winner with the The Gambler, starring Mark Wahlberg, and a return to Mega City One, this time in animated form, in Judge Dredd: Superfiend.

Bolstering the line-up are two horror sequels (Insidious and The Woman in Black) - ahead of Halloween next week - and a trailer for the re-release of Stanley Kubrick's 2001: A Space Odyssey.

Don't forget to check out our dedicated Twitter account @WHFPlaylist for all our Playlist reviews of music, movies, TV shows and games, the latest news and the occasional competition.

We kick-off with the week's biggest release, Marvel's latest superhero film. Age of Ultron sees the Avengers come under attack from Tony Stark's creation-gone-bad, Ultron (performed by James Spader), with Aaron Taylor Johnson's Quicksilver and Elizabeth Olsen's Scarlett Witch adding to the roster of villains. Judging by the trailer, it looks like our heroes are in a lot of trouble.

There are still rumblings of a sequel to Karl Urban's Dredd from a couple years back, but in the meantime you can sate your Dredd fix with this online series.

Inspired by the comics and not the film, with what looks like a fresh approach to visuals, this bootleg production should at least be better than the Sly Stallone version. It really should.

Mark Wahlberg's latest effort is rumoured to be a dark horse for Hollywood's awards season. In it, Walhberg plays the titular gambler who owes money to some bad people. We suspect it can't end well for all involved.

The little horror franchise that keeps coming back for more. The third film has a new cast which can only mean… that it's a prequel. Good news for those who haven't caught up with the second film yet.

The Woman in Black: Angel of Death

There's no Daniel Radcliffe this time (spoiler alert: he died), but this sequel returns back to the familiar house during World War II, with Jeremy Irvine looking after a group of children staying in the house to escape the bombing in London… and guess who makes an appearance.

The Woman in Black: Angel of Death is out in UK on 1st January 2015

Our final choice this week is one of the most influential films in cinema history, Stanley Kubrick's 2001. Always sure to amaze and perplex in equal measure, this restored version of the film is part of the BFI's Days of Fear and Wonder season. And with Interstellar almost upon us, it's a good benchmark to see just how far sci-fi has come (at least in terms of production values).