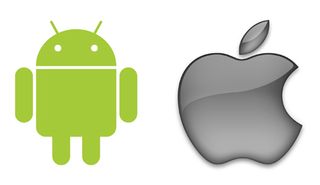 In the battle to dominate the smartphone and tablet market, Google's Android and Apple's iOS have long been the two main contenders and the rivalry shows no signs of letting up in the months ahead.

But now Apple co-founder Steve Wozniak has suggested that the Cupertino tech giant that he helped set up during the 1970s should consider shaking things up with something a little unprecedented.

In an interview with Wired magazine at the Apps World North America conference held in San Fransisco, Wozniak said Apple should release an Android handset as a "secondary phone market".

He told Wired: "People like the precious looks of stylings and manufacturing that we do in our product compared to the other Android offerings. We could play in two arenas at the same time."

MORE: iPhone 6 – news, rumours and what to expect

According to research from Kantar Worldpanel, Android ended 2013 as the leading operating system in the European market with a 68.6 per cent share – whereas iOS was next with 18.5 per cent.

The gap in the UK was much narrower – Android on 54.9 per cent and iOS on 29.9 per cent – and it'd be interesting to see how much Apple could benefit from Android's number one position in Europe.

MORE: Samsung Galaxy S5 – news, rumours and what to expect

And with Android being open-source under the Apache Software License, Version 2.0, is there anything preventing Apple from moving in that direction? Despite that, we very much doubt it'll happen.

2014 will once again see iOS go up against Android with the latest wave of smartphone releases; from the iPhone 6 in one corner to models such as the Samsung Galaxy S5 and LG G Flex.

We've heard plenty of rumours and confirmed details about the flagship smartphones and tablets coming our way this year; be sure to check back on whathifi.com as we bring you all the latest as it emerges.

That includes all the news and announcements from Mobile World Congress 2014 in Barcelona, which is taking place between February 24th and 27th and includes Samsung's Unpacked 5 event.

In a further development, it has emerged from Gina Smith – with whom Steve Wozniak wrote his biography – that the claims he had proposed the idea of Apple introducing a new Android handset were "wrong".

Smith quoted Wozniak via aNewDomain.net as saying: "My answer was brief and more thrown out like art, to mention a rare and dramatic idea to get people to [start thinking]."